Posted by Woody (Tokin Librul/Rogue Scholar/ Helluvafella!) at 9:29 AM No comments:

Theater of the Absurd

K A B U K I : The figures in the foreground remain motionless. When action is reqquired, the sets and props and the characters are moved about the stage by black-clad eminences of great power and grace. Many of the dramas have very martial, bellicose themes, but the fighting characters stand in one place on platforms, and are moved around by "unseen" forces.

Obama and the corpoRats are conducting a ritual performance of many similar attributes. His criticisms are poetically acute and pointed. The seem to reflect the vernacular of the 'left' which is (justifiably, if probably futilely) hyper-critical of the CorpoRat dominance of the machineries of the State. He wields a rhetorical flaming sword.

Meanwhile, his corpoRat 'refutiators' are obvious and bombastic. Caricatures, almost: slick/oily, like the corpoRat litigators they all are. They assail him as "hostile," and "unfriendly to business," and other affronts and disgraces.

It's a show, a political rhetorical exercise about as meaningful in a real sense as kabuki, or a passion play: a ritualized, instructive, didactic drama. Because the obvious, but elided truth of the whole drama is that the the deed is done. The deal is done gone DOWN! St. Barry didn't issue any threats, didn't throw down the glove in his "criticism"; he gave us a summary,--mayhap a running commentary--describing only what was already the case...

From any kind of an a-partisan, interstellar anthropologist stand-point, his signal accomplishments so far--HCR and FRR--upon closer examination appear mainly to have been aimed at reifying and strengthening the status quo, while sweetening the deal with some cosmetic/symbolic attachments. Both initiatives bear exactly the same spoor.

The C'Rats don't have ANYTHING to fear from St. Barry. Think about it: The market (which is for chumps anyway) is volatile, but corpoRat profits (where the REAL money is) are WAAAAAY up. They're coining money off reduced labor costs occasioned by the recession they caused, and by not hiring; personnel is the biggest chunk of ALL corpoRat expenses.

St. Barry knows, as does anyone with more intelligence than a bivalve, that it's too late for anything but rhetorical brickbats; so he's tossing red meat to the faithful, showing he RILLY RILLY IS one of US!!! The C'Rats gotta respond the way they do to make St. Barry look brave.

Why? Cuz it sustains the national fantasy, without which they'd have to resort more to overt means... which are soooo messy.

Weekly Address: No Corporate Takeover of Our Democracy from The White House on Vimeo.

See what those darn activist judges are up to lately. Messing up the will of the people, that's what! Learn about what happens when a few judges go against the majority vote in the United States. A Mark Fiore political animation.

Posted by Woody (Tokin Librul/Rogue Scholar/ Helluvafella!) at 5:39 AM No comments:

Posted by Woody (Tokin Librul/Rogue Scholar/ Helluvafella!) at 10:30 AM No comments:

More - Click here for the funniest movie of the week

A short animated movie, in which a worker in a factory learns a lesson about life. When is enough?
Written and directed by Mark Osborne in 1998. Was nominated for an Oscar. Part of the "Best of Resfest: Resfest Shorts vol. 2" DVD, and featured in "Film-Fest DVD: Issue 2 - Cannes".

Christian Groups: Biblical Armageddon Must Be Taught Alongside Global Warming
The logic of it is invincible, even if it is one of the Onion's best ever "Poe" productions:

By their logic, trying to find ways to ameliorate global, climatic catastrophe is to resist --in effect, to deny--the will of their "god." It is, in fact, blasphemy.
Blasphemy, heresy, sacrilege, apostasy, the 'spiritual sins,' are all 'thought-crimes.'

One of the Secrets of Life: "The Nothing Box

This is very funny. And pretty accurate, too.
The guy's name is Mark Mungor, afaik...

Posted by Woody (Tokin Librul/Rogue Scholar/ Helluvafella!) at 11:16 AM No comments:

This Valedictorian Understood Her Journey!


Her name is Erica Goldson, and she is/was Valedictorian of Coxsackie-Athens High School last month. She decided that her graduation speech would have an interesting twist: she took the opportunity to criticize the very concept of a valedictorian and to tear apart her whole educational experience. I couldn’t agree more with her thoughts which can be seen in the video above or read in full here.

Everything that she detected as being "wrong" with her 'education' will be repeated, expanded, and exaggerated under the regime of Shamwow's feculent, fascistic (test nazi), privatizer, charter school exploiter, militarist, one-size-fits-all (dark people) Education Secretary Arne Duncan abd Shamwow's so-called "Race to the top," an even more cynical ploy for National Standards than even el Chimperor's NCLB.
Posted by Woody (Tokin Librul/Rogue Scholar/ Helluvafella!) at 4:38 AM No comments:

A Day In The Life of "Joe Six-Pack," Self-Made Man!

Posted by Woody (Tokin Librul/Rogue Scholar/ Helluvafella!) at 5:50 AM 1 comment: 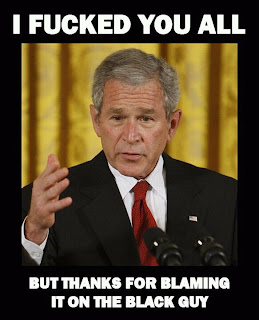 C'mon, you tihadist motherfuckers! Now you get angry?

Why now?
You finally got mad when the Government decided that people in America deserved the right to see a doctor if they are sick.
Yes, illegal wars, lies, corruption, torture, stealing your tax dollars to make the rich richer, are all okay with you,
But helping other Americans... oh hell no.
But even that misses the point. What REALLY makes y'all mad is that there's a mixed-race individual in the WhiteHouse, and you have to take orders from him.
That's what REALLY pisses you off, innit?
Posted by Woody (Tokin Librul/Rogue Scholar/ Helluvafella!) at 9:08 AM 3 comments:

Are You Now Or Have You Ever Been A "Linguistic Determinist?"

The Sapir-Whorf hypothesis postulates that the NATURE of a language --its syntax, semantic systems, grammar, and meta-linguistic components-- influences the habitual thought of its speakers. It is not an overstatement, under this theory, that such influence is ontologically and metaphysically determinative: Different language patterns yield different patterns of thought. (Example: In Hopi, the concept of "lightning" is expressed as a verb, a state of being, rather than as a noun, some named thing. Surely the universe is a different place when you and your whole culture regard "lightning" as a state of being.

The thesis is controversial because the idea challenges--actually, negates--the possibility of perfectly representing the world with language--such conceits as a univocal "meaning" to sacred religious or other community texts-- because it implies that the mechanisms of any language condition the thoughts of its speaker community. Call it the quantum theory of language. It is rather like the 'quantum theory' of linguistics.

From this thesis (along with several semesters of post-graduate work in socio-linguistics), I have extrapolated this dictum: You don't know what you cannot say. I say what I know in the terms available to me in my home language, American/English. I am frequently chided for my '$20 vocabulary, of which my use of the word 'anthropogenic' to describe climate change when a reader said I could have used man-made, is a perfectly legitimate example. In my vocabulary, 'anthropogenic' is a term whicvh encompasses "mad-made," modifies it, adds nuance and substance; hence my choice to employ it, even whn I knew I could have used a different word.
Just sayin...
Posted by Woody (Tokin Librul/Rogue Scholar/ Helluvafella!) at 11:11 AM 2 comments: