"It makes me afraid that people like you will take power next week."
Posted by Woody (Tokin Librul/Rogue Scholar/ Helluvafella!) at 12:07 PM No comments:

Religion Poisons Everything: Hitchens on Why He's ANTI-Theistic

Q: Why don't you just stay home?
A: Because aggressively theocratic stupidity threatens the whole fucking world, you moron! Yeah, you, baldy...Go grit your teeth at someone who cares.
Posted by Woody (Tokin Librul/Rogue Scholar/ Helluvafella!) at 6:20 PM No comments:

FLASH: Christine O'Donnell Is Dumb As A Shit-Soaked Rag 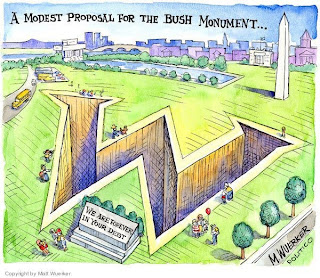 But while you've been directed by the SCUM to wonder in amazement at the spectacle of the trivialization of YOUR franchise, guess what HASN'T been being covered?

CorpoRat Fraud? No, really, there's been barely a PEEP. But fortunately Froomkin's still on the job:

If it wasn't already blindingly obvious that pervasive fraud was at the heart of the financial crisis and the ensuing foreclosure catastrophe, you would think that the latest news -- that banks have routinely been lying their heads off in the rush to kick homeowners off the properties they fraudulently induced them to buy in the first place -- would pretty much clinch it.

And yet the mainstream media still by and large hasn't connected the dots.

What we are seeing all around us are the continued effects of a vast criminal enterprise that has never been brought to account, employing a process that, as University of Texas economist James Galbraith explains, involved the equivalent of counterfeiting, laundering and fencing.

So the person with the right expertise to lead us here is a criminologist -- in particular William K. Black, one of the few effective regulators in recent history (during the savings and loan crisis of the late 1980s), a notorious knocker of heads and currently professor at the University of Missouri-Kansas City and author of the book, "The Best Way to Rob a Bank Is to Own One".

I first interviewed Black in April, and recently checked back in and asked him about this ongoing problem of the mainstream media's inability to properly cover this story. He responded with this breathless and breathtaking list of failings (slightly edited for publication):

The things I think are critical and badly underreported are:

1. The astonishing amount of mortgage fraud (literally, millions of cases annually) and how it hyperinflated the bubble and led to the Great Recession.

2. The fact that these mortgage frauds were overwhelmingly due to consciously fraudulent lending practices in which the CEOs of seemingly legitimate entities used accounting tricks as their “weapon of choice" to report higher profits and get bigger bonuses. (George A. Akerlof and Paul R. Romer got it right in the title to their 1993 article: Looting: The Economic Underworld of Bankruptcy for Profit.)

3. The disgraceful lack of prosecutions which has resulted from regulators virtually ending the practice of making criminal referrals and the pathetic March 2007 "partnership" that the FBI entered into with the Mortgage Bankers Association (the trade association of the "perps") that led the FBI and the Department of Justice to (implicitly) define out of existence fraud by the lenders (and to conceive of them as the "victim" -- which they are, but only of their controlling officers). Bush administration attorney general Michael Mukasey in June 2008 notoriously refused to create a national task force against mortgage fraud based on his claim that mortgage fraud was analogous to "white collar street crime."

4. The "echo" epidemics of fraud set off by the primary epidemic of accounting “control fraud". The fraud designed by CEOs in turn kicked off an epidemic of fraud among loan brokers and appraisers. Reporters should explore the concept of the Gresham's-style dynamic in which bad ethics were a competitive advantage and drove good ethics out of the marketplace.

5. The massive foreclosure fraud we are seeing now as another "echo" epidemic. To optimize their accounting control fraud, lenders gutted underwriting. That led to "fraud in the inducement" (vis a vis borrowers), endemic documentation problems, and an extraordinary numbers of defaults. The process required tens of thousands of real estate financing personnel to commit fraud on a daily basis as their core function. Some of these people are unemployed, but many are in the industry and are presently engaged in loan servicing. Now that their job is to foreclose on properties, there is no reason to expect that they would suddenly become honest, and they haven't.

6. The ongoing massive cover up of losses on bad assets, particularly by the “too big to fail” institutions, which I call “systemically dangerous institutions” (SDIs). Those institutions, along with Federal Reserve Board Chairman Ben Bernanke and Congress (at the behest of the Chamber of Commerce and with no opposition from the Obama administration) in April 2009 forced the Financial Accounting Standards Board (FASB) to change the rules so that the banks do not have to recognize their losses unless and until they sell the bad assets. The implications of this cover up are large (and rarely reported). At the very least, it means that Treasury Secretary Timothy Geithner's propaganda campaign about TARP saving the world at virtually no cost (perhaps even a "profit") is nonsense -- despite its success in influencing the Washington Post and Los Angeles Times. Consider:

B) The repayment of TARP funds does mean that the banks are freed from any meaningful restraint on senior officer compensation. Note that absent the accounting lies the banks would often be reporting losses (and failure to meet required capital requirements, or outright insolvency) and could not pay their senior officers bonuses and would be subject to mandatory closure under the Prompt Corrective Action (PCA) law.

C) No commercial entity would have ever signed the TARP deals on the terms that the U.S. drafted for itself. The U.S. provided not only fresh money but an unlimited de facto guarantee (along with permitting phony accounting). If the U.S. had negotiated competently it would have owned virtually all the shares of every TARP recipient (which, of course, was a political impossibility).

D) The accounting lies are stalling the recovery. Markets cannot clear promptly when one creates an incentive to hold massively overvalued assets for years.

E) The losses are still there, but the taxpayers are on the hook via Fannie and Freddie and the Fed (which has taken over a trillion dollars in toxic collateral at grossly inflated values).

7. The continued absence of effective regulation. It should be scandalous that President Obama left in charge, or even promoted, the anti-regulators who permitted the Great Recession. The (failed) anti-regulator of Fannie and Freddie, for example, remains FHFA's acting director. This is significantly insane as a matter of both economics and politics. (The administration doesn't even seem to realize the issue of integrity.)

8. The crises of state and local government and the lack of a rational basis for Republican and Blue Dog opposition to the proposed revenue sharing component of the stimulus bill. The compounding insanity of the administration failing to fight for its concept and failing to make explicit how badly its removal would harm the recovery, employment, and vital government services.

9. The insanity of accepting mass, long-term unemployment rather than having the government provide productive jobs for everyone willing to work (as the employer of last resort).

I have nothing to add.

Nor do I.
Posted by Woody (Tokin Librul/Rogue Scholar/ Helluvafella!) at 11:32 AM 1 comment:

Mirror On The Wall, What Is A "Curmudgeon," Really?

What is a Curmudgeon anyway? It is a question of some interest to me, because it is a label which has attached itself to me upon occasion. The answer provided by writer Jon Winokur, who just about owns the franchise rights on curmudgeonry (much more in keeping with the word than "curmudgeonliness," nest paw?) is not what you might expect.

A curmudgeon's reputation for malevolence is undeserved. They're neither warped nor evil at heart. They don't hate mankind, just mankind's absurdities.

They're just as sensitive and soft-hearted as the next guy, but they hide their vulnerability beneath a crust of misanthropy. They ease the pain by turning hurt into humor.

They attack maudlinism because it devalues genuine sentiment.

Nature, having failed to equip them with a servicable denial mechanism, has endowed them with astute perception and sly wit.

Curmudgeons are mockers and debunkers whose bitterness is a symptom rather than a disease. They can't compromise their standards and can't manage the suspension of disbelief necessary for feigned cheerfulness. Their awareness is a curse.

Perhaps curmudgeons have gotten a bad rap in the same way that the messenger is blamed for the message: They have the temerity to comment on the human condition without apology. They not only refuse to applaud mediocrity, they howl it down with morose glee. Their versions of the truth unsettle us, and we hold it against them, even though they soften it with humor.

Or other literary, dramatic and/or rhetorical tropes. On "humor," Winokur opines:

Funny people have a heightened sense of the absurd. They take life seriously, but not literally. They’re sometimes described as “twisted,” but it’s just the opposite: they’re the sane ones in an insane world. Funny people are also aware of the music of humor. They instinctively know that the stress and number of beats has to be just right and that a superfluous syllable can kill a laugh, whether written or spoken. That’s why copy editors are hazardous to humor manuscripts. They care about being grammatically correct, not funny.
Read more.

OF COURSE there are conspiracies! Big ones. Global ones. Fatal ones, even.

What on earth would lead anyone to believe that the wealthiest, post powerful, most influential people in the whole fucking world would NOT get together every once in a while to decide how best to preserve their interests, their riches, and their grip on power? Were I in their situation, I certainly would do.

California: This is your state on Whitman

Posted by Woody (Tokin Librul/Rogue Scholar/ Helluvafella!) at 6:53 AM No comments: