This, to yer ol' perfesser, is what's called a "specious" argument.
It LOOKS reasonable and rational, but the premises don't follow.
First, and foremost:
All "news" is essentially and effectively propaganda.
Any account presented through the media, of any description, always already (as the old Marxists usta say) has been spun to SOMEBODY's advantage.
Faux Nooz egregiously takes advantage of it, but they are not the only offender.
Also:
We cannot "outlaw" or "forbid" lying in the Press, because the Constitution prohibits a priori prohibition of any speech by the State.
And, for the record, "Cable TV" killed the Fairness Doctrine, which in practice had ALWAYS done more to SUPPRESS controversial speech than it EVER did to promote it.
Posted by Woody (Tokin Librul/Rogue Scholar/ Helluvafella!) at 8:33 AM No comments:

Our Time Has Come; Take Notes. 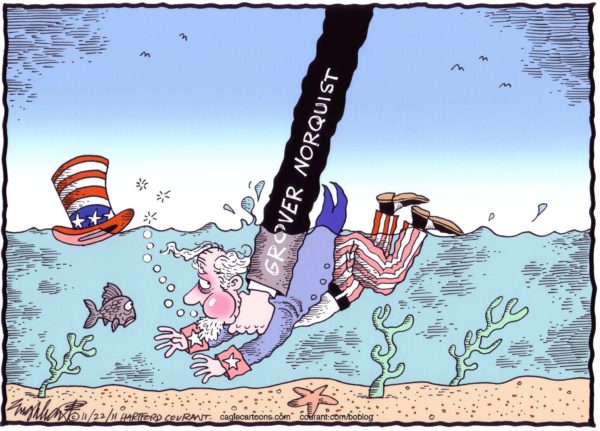 They call this "foreshadowing" in LitCrit:
"Pick a Republican with enough working digits to handle a pen to become president of the United States. This is a change for Republicans: the House and Senate doing the work with the president signing bills. His job is to be captain of the team, to sign the legislation that has already been prepared." – Grover Norquist @ CPAC (Feb. 2012)
Mission: Accomplished.


See, also: “As democracy is perfected, the office of president represents, more and more closely, the inner soul of the people. On some great and glorious day the plain folks of the land will reach their heart’s desire at last and the White House will be adorned by a downright moron.” — H. L. Mencken, July 26, 1920
(Illustration by André Carrilho)
Posted by Woody (Tokin Librul/Rogue Scholar/ Helluvafella!) at 1:04 PM 1 comment:

The Rudiments of Evidence Cut & Pasted from "J Chris Cochran":
Ok, I think it’s time for a brief lesson on evidence, because I have read a lot of posts recently from folks who clearly don’t understand what is and what isn’t evidence. Ok, here goes:
The fact that four individual women don’t know each and, yet, have eerily similar stories, is evidence. It’s circumstantial evidence; but circumstantial evidence is admissible. Indeed, some cases can only be proven by circumstantial evidence.
Second, a person’s general reputation in the community is also allowable evidence. Evidence of the general reputation of a person affords the basis for an inference as to the person’s actual character; for behind a bad reputation usually lies a bad character. Thus, when former co-workers state that it was common knowledge that someone dated high school students when he was a grown man — a prosecutor — well, that is evidence. Reputation evidence.
The fact that these four individual women told others the same thing in the past is also admissible evidence. It is NOT hearsay. In fact, under 801(d)(1), a prior consistent statement is admissible if it is offered to rebut an express or implied charge of recent fabrication or improper influence or motive. Thus, when an alleged perpetrator accuses his victims of lying, being improperly influenced or having an improper motive, the prior consistent statements are admissible as evidence of the veracity of their stories.
You know, like, if someone accuses four individuals of lying, being bribed or having a political motive, then the prior consistent statements are admissible as evidence to prove the stories are not recent fabrications. Next, one would then weigh this evidence against the evidence offered in opposition to it. Posted by Woody (Tokin Librul/Rogue Scholar/ Helluvafella!) at 6:04 AM 4 comments:


Attention, Shopperz:
For some reason this stupid, fucking Obot meme keeps appearing.
It is wholly and totally misleading.
The deficit is reduced by only two means:
1) Increase revenues
2) Decreased expenditures.
Revenues haven't increased, because the Congress will not pass legislation that includes revenue-increasing features--i.e., taxes.
That means that the deficit mainly has been reduced by reductions in federal spending.
Which means: The deficit was reduced on the backs of the most vulnerable citizens, by reducing and/or cancelling services to poor, the elderly, the young, veterans, disabled people, and by attacking vital Govt. agencies like NOAA, CDC, EPA, etc.
That was and is properly called "austerity." Remember the "sequester?" It ain't OVER!
Raise your hand if you're PROUD of the reductions NOW, dickwadz! You should Be FUCKING THANKFUL, you fucking ingrates

Posted by Woody (Tokin Librul/Rogue Scholar/ Helluvafella!) at 10:26 AM No comments:

This is such optimistic poppycock! Such hopeful blather! Such unimaginable codswallop! At the risk of appeearing churlish: It simply nauseates yer ol perfesser for its utter, gibbering, an-historical naivete!

Humans are tribal creatures in our social dealings.

We BEGAN as SEPARATE entities in SEPARATE tribal chains of kinship.

We were NEVER "all one" tribe or family or race or species. There was no dissolution of some archaic oneness. There never was some grand unity.

Tribalism's head isn't ugly. It's how we are. Life is competitive; humans organized in tribes in order to further their competitive advantages for food territory and mating.

We're not large or strong enough to be solo hunters, like leopards or tigers. We're not numerous enough for the protection that herds/schools/swarms afford. Tribes "work," and that's how humans evolved.

There is a word in all indigenous, North American languages that designates fellow tribal members; it always translates as "the People," or 'the Humans,' obviously (lexically) excluding 'Others' from common humanity.

There are ALWAYS "insiders" (indigenes) and "outsiders" (exogenes), and it has required "civilization" to overcome the tribal distances and resistances, and allow (compel) competitors to cooperate.

Posted by Woody (Tokin Librul/Rogue Scholar/ Helluvafella!) at 8:25 AM No comments:

Myth and Magic of Presidential Reach

The Meme Ranger rides again! (These things just keep appearing, like mushrooms!) That maundering pack of rabid Obots at Politicus hoisted out the familiar purplish hue of their adulation, declaring:
Obama’s America: Low gas prices, soaring stock market, record private job growth and growing manufacturing:
People, give it a rest.
Yes, he's a good father, a loving husband, a good provider and a fine citizen.
BUT: You're applauding his pursuit of the One-Percenters' agenda. What kind of sense does THAT make?
Neither 'gas prices,' nor the 'soaring stock market,' nor 'record private growth," nor 'growth in manufacturing' are matters over which the president--ANY president--has any control. They are, however, all VERY good news for the Oligarchs, whose loyal and attentive tool ThePrez has been.
Yes, gas prices are down...Primarily due to seasonal fluctuations in demand and refinery capacity..
Yes, the "soaring" stock market has "soared." And it has gotten the 1-5% much wealthier. But, surprisingly, it hasn't 'trickled down' yet in any noticeable amount to the poor, elderly, young, ill and/or disabled, veterans, and other vulnerable citizens whom his "austerity" programs like the 'sequester,' have butt-fucked.
And yes, most of the jobs (7-9 MILLION) that the oligarchs killed in 07-09 are 'back.' At least in raw numbers.
But the jobs that have been re-created are predominantly the low-wage, part-time/temp, no benefits-no future kind.
AND, between then (2007) and now, more than 11 MILLION NEW workers have joined the labor force, and there are pretty much fuck all jobs for them.
"USer" industries won't "come back" until USer workers have gotten a lot MORE desperate, compliant, and hungry: willing to do ANYTHING, under ANY conditions, for ANY wage..
So, though Pres Lowbar may be a nice guy, a good father, an admirable husband and a fine citizen, as president, he's been a convenient help-meet and available scapegoat for the Righturds, and--because he has turned out NOTHING like what the "brand" promised when he was elected--also a serious and major distraction to the "Left"--such as it is...
Posted by Woody (Tokin Librul/Rogue Scholar/ Helluvafella!) at 2:23 PM 2 comments:

Compare & Contrast: Both Huxley and Bernays Are Explaining the Same Thing

Edward Bernays, Freud's favorite nephew saw it clearly, already in the '20s, 30 years before Huxley. At that time, neither Bernays nor anyone else thought it was exceptional that the "best" minds would do all the thinking, and didn't regard it with anything other than calm pleasure:
"“The conscious and intelligent manipulation of the organized habits and opinions of the masses is an important element in democratic society. Those who manipulate this unseen mechanism of society constitute an invisible government which is the true ruling power of our country. ...We are governed, our minds are molded, our tastes formed, our ideas suggested, largely by men we have never heard of. This is a logical result of the way in which our democratic society is organized. Vast numbers of human beings must cooperate in this manner if they are to live together as a smoothly functioning society. ...In almost every act of our daily lives, whether in the sphere of politics or business, in our social conduct or our ethical thinking, we are dominated by the relatively small number of persons...who understand the mental processes and social patterns of the masses. It is they who pull the wires which control the public mind.”
It is interesting to consider these two leading thinkers' (Bernays and Huxley) explanations of essentially the same phenomenon: The "manufacture of the consent of the governed."

Posted by Woody (Tokin Librul/Rogue Scholar/ Helluvafella!) at 7:19 AM No comments: