Myth and Magic of Presidential Reach 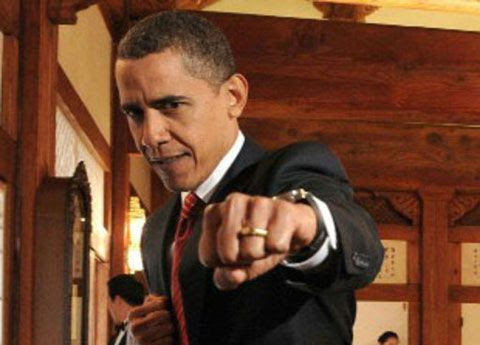 The Meme Ranger rides again! (These things just keep appearing, like mushrooms!) That maundering pack of rabid Obots at Politicus hoisted out the familiar purplish hue of their adulation, declaring:
Obama’s America: Low gas prices, soaring stock market, record private job growth and growing manufacturing:
People, give it a rest.
Yes, he's a good father, a loving husband, a good provider and a fine citizen.
BUT: You're applauding his pursuit of the One-Percenters' agenda. What kind of sense does THAT make?
Neither 'gas prices,' nor the 'soaring stock market,' nor 'record private growth," nor 'growth in manufacturing' are matters over which the president--ANY president--has any control. They are, however, all VERY good news for the Oligarchs, whose loyal and attentive tool ThePrez has been.
Yes, gas prices are down...Primarily due to seasonal fluctuations in demand and refinery capacity..
Yes, the "soaring" stock market has "soared." And it has gotten the 1-5% much wealthier. But, surprisingly, it hasn't 'trickled down' yet in any noticeable amount to the poor, elderly, young, ill and/or disabled, veterans, and other vulnerable citizens whom his "austerity" programs like the 'sequester,' have butt-fucked.
And yes, most of the jobs (7-9 MILLION) that the oligarchs killed in 07-09 are 'back.' At least in raw numbers.
But the jobs that have been re-created are predominantly the low-wage, part-time/temp, no benefits-no future kind.
AND, between then (2007) and now, more than 11 MILLION NEW workers have joined the labor force, and there are pretty much fuck all jobs for them.
"USer" industries won't "come back" until USer workers have gotten a lot MORE desperate, compliant, and hungry: willing to do ANYTHING, under ANY conditions, for ANY wage..
So, though Pres Lowbar may be a nice guy, a good father, an admirable husband and a fine citizen, as president, he's been a convenient help-meet and available scapegoat for the Righturds, and--because he has turned out NOTHING like what the "brand" promised when he was elected--also a serious and major distraction to the "Left"--such as it is...
Posted by Woody (Tokin Librul/Rogue Scholar/ Helluvafella!) at 2:23 PM 2 comments: