A Danielson Evaluation of Thanksgiving Dinner 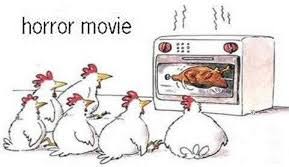 Woody'z gotta Holiday Treat for those teachers of his acquaintance-- PE Nolan, Suzanne Farley﻿, Suzanne Libourel, Ellen Jampole﻿, Susan Huddleston Edgerton, and all the rest.
(For non-teachers, The Danielson Guide is a notorious teacher-evaluation "rubric" which permits the disguises of evaluators' biases behind glossy glossaries. Here's your monthly "eval.")

The Danielson Guide to a Highly Effective Thanksgiving:
Unsatisfactory: You don’t know how to cook a turkey. You serve a chicken instead. Half your family doesn’t show because they are unmotivated by your invitation, which was issued at the last minute via Facebook. The other half turn on the football game and fall asleep. Your aunt gets into a fight with your uncle and a big brawl erupts. Food is served on paper plates in front of the TV. You watch the game, and root for the Redskins.

Needs Improvement: You set the alarm, but don’t get up and the turkey is undercooked. 3 children are laughing while you say grace. 4 of your nephews refuse to watch the game with the rest of the family because you have failed to offer differentiated game choices. Conversation during dinner is marked by family members mumbling under their breath at your aunt Rose, who confuses the Mayflower with Titanic after third Martini. Only the somewhat nice relatives thank you on the way out. Your team loses the game.

Proficient: The turkey is heated to the right temperature. All the guests, whom you have invited by formal written correspondence, arrive on time with their assigned dish to pass. Your nephew sneaks near the dessert dish, but quickly walks away when you mention that it is being saved until after dinner. You share a meal in which all family members speak respectfully in turn as they share their thoughts on the meaning of Thanksgiving. All foods served at the table can be traced historically to the time of the Pilgrims. You watch the game as a family, cheer in unison for your team. They win.

Distinguished: The turkey, which has been growing free range in your back yard, comes in your house and jumps in the oven. The guests, who wrote to ask you please be invited to your house, show early with foods to fit all dietary and cultural needs. You watch the game on tape, but only as a video prompt for your family discussion of man’s inhumanity to man. Your family plays six degrees of Sir Francis Bacon and is thus able to resolve, once and for all, the issue of whether Oswald acted alone.
Posted by Woody (Tokin Librul/Rogue Scholar/ Helluvafella!) at 12:13 PM