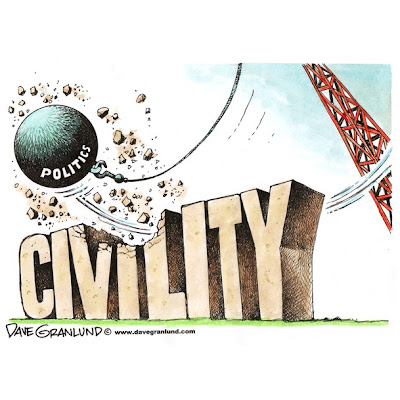 I sorta had these sequential thoughts on a FBook "wall" of a friend in El Paso (DOTOF, Kathy Mc), all in all of which I am just another brick in. The issue was about whether 'civility' was, itself, a value or just a convention. I took the latter track:

Considers "Civility." Thinks that the effete fux are saying when they demand 'civility' is that they have the right NOT to be threatened by YOUR expressions of hostility, no matter how well deserved or earned, or what injury inflicted; while holding tightly to their own privilege to ruin you with a glance, beggar you with a letter: "Yerr never gonna work in THIS town again." "Kiss yer credit g'bye, big guy!"

When the oligarchs and their toadies demand civility of their opponents, what they are doing--and they know it--is depriving those opponents of the only weapon they have to oppose the velvet gloved power of the privilege.

The Owners inflict on us even worse injuries and insults, but because they do it mostly without a word, or symbolically in their captive "press," they 'win.'

If you've ever studied 'the press,' one trope absolutely LEAPS off the pages, for as long as the stories have been reported: In "Labor" news, or in ANY stories about labor action/negotiations, management is ALWAYS said to be "offering," while Labor is ALWAYS shown "DEMANDING!"

That's the whole rhetorical story, the entire dynamic of "civility," in microcosm.