The Secret To USer Success: Make OTHERS Bear the Cost 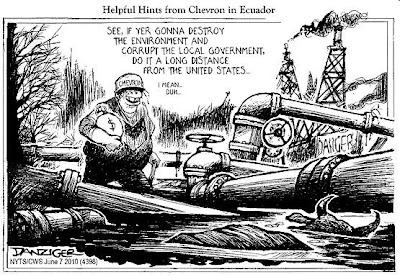 One of the "best" things about being a planetary/hemispheric "super-power" is that you get to dump the pain, price, and pollution of your prosperity on the heads of less-powerful people and states. In pursuit of chep oil for USer consumers, Texaco (later bought by Chevron) has FUCKED UP the Ecuadorian Amazon by dumping, over the course of almost 30 years, more than SIXTEEN BILLION gallons of toxic, polluted waste/water into the back-country river systems. Aravosis' AMERICAblog has the details:

This time, it's not BP, but rather Chevron at the center of an oil disaster controversy. The final arguments against Chevron have been made in Ecuador where plaintiffs are asking for $113 billion in damages. Unlike the Gulf Coast, access to the rain forests of Ecuador made it more challenging to cover the story, but as the court case nears its end, photos related to the alleged disaster are available. (See below.) As we've seen around the world with other oil-related disasters, the human suffering is widespread and the oil industry is reluctant to accept their responsibilities.

This particular case started in 2003, though the legal challenges stretch back to 1992. The plaintiffs argue that Texaco dumped 16 billion gallons of heavily polluted waste water from their oil production operations into waterways in the Amazon between 1964 and 1990. Chevron acquired Texaco in 2001, and claims that its subsidiary "fully remediated its share of environmental impacts" before 1992.

Follow the link, here, for the rest of the piece. There are photographs--one set from Rainforest Action Network (RAN, and another set by a private citizen, which hint at but do NOT capture the devastation.

We have a LOT to answer for; luckily (for us, anyway), there's nobody around to ask the questions...
Posted by Woody (Tokin Librul/Rogue Scholar/ Helluvafella!) at 4:39 AM