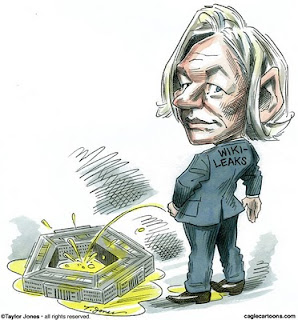 Julian Assange, embedded in the Ecuadorian Embassy in London, and the rest of those mischievous sprites at WikiLeaks have gone done stuck another grubby thumb in the eye of the National Security State. Beginning on Oct. 25, and continuing intermittently, the minions of Assange plan to go public with revelations culled from US Dept. of Defense publications, memoranda, and internal communications dealing with the proper, as well as the "acceptable," ways and means of managing captives from war-zones where no "war" has been declared.

The documents are "more than 100 classified or otherwise restricted files from the United States Department of Defense covering the rules and procedures for detainees in U.S. military custody," according to a Wikileaks press release circulating on the web. The first of these include the Standard Operating Procedures (SOP) manual from Camp Delta, also known as Guantanamo, SOP draft manuals from Camp Bucca in Iraq, a MOU (Memo of Understanding) on transferring detainees among UK, US, and Australian authorities, and seven other documents, all from the year 2004, which index the concerns of the military bureaucrats with respect to the safe, sanitary, disciplined warehousing of indigenous folks captured by or turned over to "Allied" forces in Iraq. The Camp Delta SOP forbids using, or even possessing, "sap gloves," which are gloves weighted with lead shot, among other things; what's forbidden is often revealing.

One particularly interesting document procured by the Wikileaks folks is this "References for urban operations manual." This fascinating, 11-page document apparently catalogues  publications concerning the "urban operations" in Iraq in some indistinguishable time period (it was created in April, 2004), in which there is reported to be information about the conduct of such operations as part of OIF ("Operation Iraqi Freedom," the successor to the short-lived "Operation Iraqi Liberation, or "OIL," which briefly preceded it in 2003).

Sources listed include everything from the official logs of Marine units engaged in 'urban operations' in Iraq (which at that period might have included Faloujah) to a WaPost piece by Tom Ricks titled "Ruses, Ambushes, and Other Guerilla Tactics, from March 2003. There are approximately 30 entries per page; at eleven pages, that's probably well over 300 stories from sources around the globe and from sources including The Nation and Counter-punch, as well as Al Jazeera, and the Asia Times.
Posted by Woody (Tokin Librul/Rogue Scholar/ Helluvafella!) at 1:42 PM