As Goes California...:
California is the land where democracy's dreams are tried, and often found wanting.

This was particularly true of the Progressive-era, pro-democracy expedient of the Initiative. It was supposed to be an expedient by which the voice of the people could find its way onto the ballot. And it worked okay for a while. 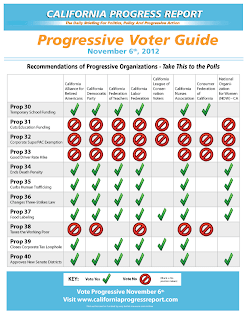 Until, that is, the Owners/Oners/Oligarchs figured out that, through astro-turf organizations, they could play the roles of citizens and get onto the ballot measures which they couldn't get through the legislature, but could cozen, manipulate, bribe, or intimidate the yokels into supporting, if they spent enough money.

As every election cycle, the Cal ballot is replete with measures, ranging from mandatory labeling of GMOs, ending the death penalty and three-strikes sentencing, and this year, the Billionaire's Bill of Rights. HERE is a link to a "Progressive's Ballot Guide for the California Initiative ballot. And here is an intelligent, reasonable video explaining two important measures.

Seriously. I saw a foto the other week of an 8th grader who was ALREADY 6'5" and 250 lbs dreessed out in helmet and pads to take on OTHER 8th graders of the standard, 5'6, 100-125 pound variety. This report from the NYTimes highlights what are the (hopefully unintended) consequences of submitting pre-teens to repeated, concussive head trauma.


It took just one play on Sept. 15 to suggest the game between the Southbridge Pop Warner pee wees and their rivals, the Tantasqua Braves, could mean trouble. Two Tantasqua players were hit so hard that their coach pulled them off the field. An emergency medical technician on the sidelines evaluated the boys, grew worried that they might have concussions, and had them take their pads off.

The life spans of life-long foot-ball players is more fraught with disabling injuries, and on the whole, is a lot shorter, than that of non-ballers.

This is an older (2009) essay, from Black Agenda Report, on the apparently (allegedly) inadvertent, but surprisingly similar projects begun at the beginning of the Obomber regime to further standardize and corporatize America's schools. A decade ago,


Quite separately from each other, Secretary of Education Arne Duncan, Rev. Al Sharpton and Newt Gingrich have long ago forfeited whatever credibility they may once have had. Taken together, they are simply a bad joke: three grown men publicly eye-poking and slap fighting each other while they all come together to sell us high-stakes testing, charter schools, educational privatization and the whole package of corporate “school reform.”
...Duncan now pledges to extend the Chicago model of high stakes testing and massive school closings to create opportunities for what he calls “innovative” charter schools ... Even now (2009), the Obama administration is withholding federal education funds from states and school districts to force nationwide implementation of these so-called “reforms.”

Sharpton and Gingrich fare no better, of course.
But the truly fascinating thing is that, along with Billionaire meddler Bill Gates (whose ulterior motives for an IT-based curriculum mainly supplied by Microsoft SHOULD make him toxic), between them, ALL the high-profile school/teacher CorpoRat school-reform and charter school advocates have exactly ZERO HOURS teaching in ANY classroom ANYWHERE ON FUCKING EARTH!@
++++++++++++++++++++++++++++++++++++++++++++++++++++++++++++++
This is one of those remarkable RSA videos in which the pen traces and expands the words of the speaker. If you're unfamiliar, either with the work of Robinson, or with the genius of these RSA illustrators, take a seat and get ready for a treat.

This animate was adapted from a talk given at the RSA by Sir Ken Robinson, world-renowned education and creativity expert and recipient of the RSA's Benjamin Franklin award. For more information on Sir Ken's work visit: http://www.sirkenrobinson.com
Posted by Woody (Tokin Librul/Rogue Scholar/ Helluvafella!) at 9:53 AM