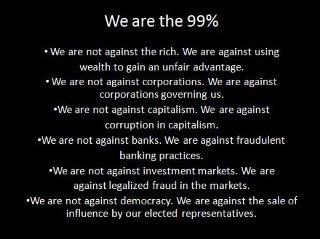 Back in the '30s, Justice Louis Brandeis wrote:
"We may have democracy, or we may have wealth concentrated in the hands of the few, but we cannot have both."

As Ike's MIC speech, and a couple by FDR (especially the "Second Bill of Rights" speech, among others), Brandeis was not WARNING against some possible outcome. He was, instead, reciting an eulogy, actually explaining how it had come to pass that the wealthy had usurped the democracy and turned it into their own plaything. Cuz the choice had already been made, and it was to save the plutocracy, and to hypostatize wealth.

I was reminded of Brandeis' apt and apposite observation while perusing the F-book, where I happened upon the image at the top of this column. I wanna answer it point by point, since it seems to wanna present an apologia for the Occupation against claims aboput their agenda...I have seldom read a more naive pile of Horsecrap! Bullshit! Codswallop! Horsehockey! Malarkey! or Piffle! Balderdash! this year! I wanna dispatch 'em one at a time.

First, it declares: "We're not against the rich; we're against using wealth to gain unfair advantage."

Codswallop! Of course we're opposed to great wealth, per se! The only reason or purpose of excessive wealth is to use it to corner political power. Why ELSE would you want it? And, besides: to the rich, anyway, being wealthy is not an "unfair" advantage. It's one they believe they've "earned." This is inevitable, as long as there is no limit on the amount of wealth one may amass, and no effective way to embarrass them.

But in ANY political economy in which CorpoRats own and operate the equipment, naturally they're going to run things. SO of COURSE we oppose rampant Corporatism: Corporations, shriven of any responsibility to anything but their bottom lines" will inevitably use their power to usurp the power of more democratic institutions, because corporations are inherently anti-democratic. They are AUTOCRATIC.

The claim is made: "We are not against banks; we are against fraudulent banking practices."

Of COURSE we're hostile to banks, per se... As CorpoRat entities, their only actual, legal responsibilities are to their STOCKHOLDERS. They MUST show a profit, by LAW. So they'll turn every possible trick, slickery, and fraud just short of extortion to pry an extra dinar from their depositors. Banks practice frauds the way dogs scratch fleas: reflexively. The only banks which MIGHT be immune are depositor-owned institutions, like credit unions.

Then we see: "We are not against investment markets; we are against fraud in those markets."

But investment markets are ALWAYS fraudulent. No "industry" which depends on "securitizing" and selling collections of what are basically markers for bets for and against average citizens paying their mortgages for its solvency, or on imaginary things like commodity "futures" can escape fraud. It's all a dream.

It says: "We're not against capitalism; we're against corruption in capitalism."

That's absurd on the face of it. Capitalism, itself, like all the institutions it spawns, is INHERENTLY and INTRINSICALLY corrupt. It depends on that which cannot be: endless growth (or the promise 0f it). It's ONLY natural end-state is monopoly, with "competition" used only for the purpose of driving OUT COMPETITORs, after which the State is employed to preserve the monopolists..

And democracy inside such an array of corruption institutions is impossible, because the "representatives" will ALWAYS, ALREADY be available to be bought, on one pretext or another.

There is NOTHING in the economic "order" of the USfoA which is designed, built, intended or structured to actually ADVANCE the interests of the average person. Nothing; though there are parts of it which, through accident or inadvertence, do not directly fuck us up. And it's past time to forego the illusiuon that there is.
Posted by Woody (Tokin Librul/Rogue Scholar/ Helluvafella!) at 2:16 PM