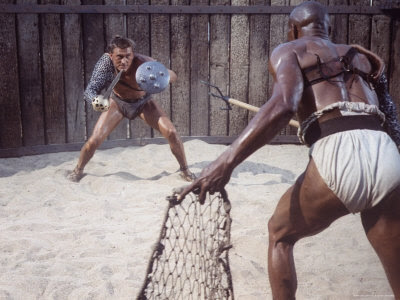 Because I still vividly recall the epic 1960 film, starring Kirk Douglas, Olivier and the LUSCIOUS Jean Simmons (screenplay by Dalton Trumbo, for all you buffs),the recent televised emergence--or possibly the re-emergence--of the "Spartacus phenomenon" has a couple of dimensions which are interesting, to the semiotician in me.
First, there's the revolutionary spirit-thing: Spartacus, the historical person, was a gladiator who did lead a doomed, but for a time successful slave-revolt, in the army of which were MANY other former gladiators. 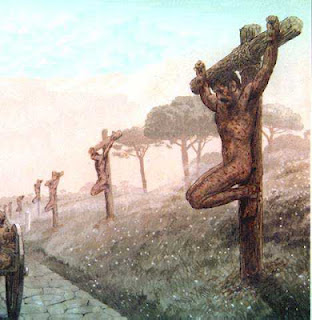 When finally conquered, the defeated slaves were ordered by the Romans to turn over their leader. But, instead, the story goes, they all rose, to a man, and proclaimed themselves to be "Spartacus." There is an obvious appeal to such a figure, such a story in such times as ours. They were ALL crucified by the Romans for their troubles, every 10 yards, for a couple of miles along the Via Appia, on the way back to Rome, iirc.
But their ultimate, grisly fates notwithstanding, the refrain "We Are ALL Spartacus" resonates with certain features of the Occupy movement, because we are, actually, after all, ALL Occupiers. 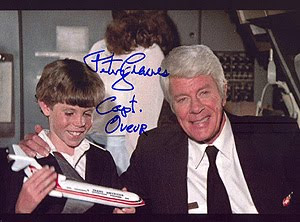 Then there's the homo-erotic-stimulation-thing...Peter Graves' duet with Kareem in the cockpit scene in "Airplane" was funny, because it struck, smote, clattered a familiar meme.
Plus, since it's on cable, you get plenty of "hetero" tits and ass, too. Gasping, heaving, sensual nudity has been a staple in "classical" stories on cable since the beginning of the medium.and they have returned to these pleasant waters with a certain verve... 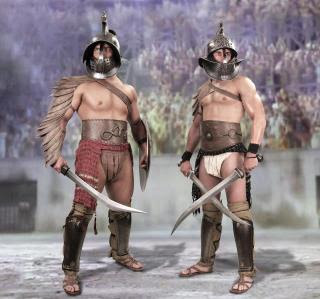 And there's the war-pron-thing.
Computerized graphics makes it possible to animate the imagined consequences of fierce blows struck with sharp blades and other implements with unprecedented, in-the-moment detail. Hey, boys! Just in time for next X-mas: Spartacus "action" figures! They don't just bleed, THEY SPURT! THEY GUSH! THEY SPEW BLOOD!
On the reality side, it appears, from evidence exhumed from several old Roman grave-sites for deceased gladiators uncovered in recent years, the most common, death-dealing wound with which failed combatants were dispatched was a single, violent plunge of the "gladius" (the short, straight sword for which the gladiators are named) directly down the throat of the conquered opponent.
This suggests to me that the vanquished fighters were expected to submit to their conquerors, and not to merely fall to them. A last, fatal humiliation.
I think it must be an extraordinarily unpleasant way to die. 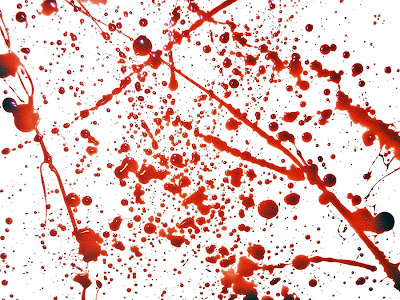