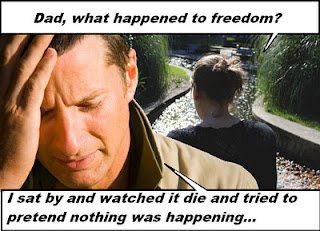 I invite you to regard this image. Evocative lighting, the plaintive voice, the guilty admission? This is just such a blinding oversimplification that it just pisses me the fuck off. (Hence the PITH helmet is today's haberdasherial choice.)

To me, the ol' semiologer, what the image just simply REEKS of is the CorpoRat-ignoring/forgiving, victim-blaming and superficial reduction of an incredibly complex phenomenon --the total almost 100-year-long program of the wholesale brainwashing of an entire populace for the purpose of taking over the direction and manipulation of their individual and collective live--and then dumping it ALL on 'the people." Nothing less!

The reactionary, reflexively defensive, hysterically fearful, deeply disturbed public mood we are experiencing is the consequence of an experiment in human emotional manipulation the likes of which had never even IMAGINED on this scale ever before in history. The German Reich gave it a try, but it didn't last long enough to have trans-generational effects. China, too, has now outlived MOST of the people who recall the time before Mao, and so will soon no longer have living witnesses to the past.

The USer effort was begun under the auspices of Woodrow Wilson who, AFTER 1916), used the new mass-media technologies to woo and threaten and cajole and bribe and bully the people INTO the war he had been re-elected IN 1916 for keeping the Country out of. Wilson more and more has come to be regarded as the prototype of "neo-liberalism." The program was directed and abetted in full consciousness by the best "Liberals" of the time--the same class that Lenin called the "vanguard intellectuals": Walter Lippmann, Ivy Lee, and of course, Freud's favorite nephew, Vienna-born and educated, Edward Bernays.

It was Bernays who, a little later would pen these immortal ords about the pewople's 'true rulers':

“The conscious and intelligent manipulation of the organized habits and opinions of the masses is an important element in democratic society. Those who manipulate this unseen mechanism of society constitute an invisible government which is the true ruling power of our country. ...We are governed, our minds are molded, our tastes formed, our ideas suggested, largely by men we have never heard of. This is a logical result of the way in which our democratic society is organized. Vast numbers of human beings must cooperate in this manner if they are to live together as a smoothly functioning society. ...In almost every act of our daily lives, whether in the sphere of politics or business, in our social conduct or our ethical thinking, we are dominated by the relatively small number of persons...who understand the mental processes and social patterns of the masses. It is they who pull the wires which control the public mind.”
― Edward L. Bernays, Propaganda (1928)

As to the contents of the guilty dad's sorrowful admission, a (and not only the only) more accurate reply would be:

Child, That's a good question, and the answer isn't as simple as some would insist. Just sit down and let me tell you a story. Once upon a time, many years ago before you were born, while your mom and I were still kids, most of the people still had steady, regulat, permanent jobs, with pensions when they retired. And the 'people' still got raises when they improved productivity. No, really.

Then around 1980, the Bosses decided unilaterally to violate the de facto bargain of the previous 50 or so years, which was to share profits from improved productivity with workers. Under the presidency of a second-rate screen-actor and spokesmodel and conservaturd sock-puppet named Reagan, and with the full cooperation and collusion of Govt. regulators, the Congress, the Fed, and the CorpoRat boardrooms, the decision was made to direct wage increases away from workers' pay-checks, and into profits where they could be split up among the Bosses, who they felt deserved them more..

Now, there was a glitch in this system, but the clever buggers soon figgered it out. The problem was that it was and still is a "consumer"-driven" economy. "Consumers" had to have money with which to consume. But without pay raises, where would the money come from? The Bosses still had to keep demand up, had to move those refrigerators, those color teevees...

And here's where they proved their true predatory genius: They took the profits they'd reaped from NOT giving wage increases, and turned them into LOANS to the people from whom the money was originally stolen ("legally," anyway), so the proles could "buy" the tchotchkes upon which the most powerful economy in the whole fucking world depended...Remember the Chimperor telling Murkins to "Go SHOPPING to erase and/or mute their fears after 9/11? He was serious. He meant it.

So, my child, in order to keep up with the CorpoRat-fueled consumptive bingeing it ceaselessly promotes and requires to maintain the family's status, as well to support the "consumer economy," I took a second job, and yer momma went to work, too. We had the house to keep up, and four cars--ours and that of your brother and you--aren't cheap, you know? Insurance for you and him is over $5000/year. And vacations. Remember DisneyWorld when you were ten?? And personal electronics? They're not cheap. Two or three hundred a month for the phones and wi-fy.

So, with one thing and another, I kinda lost track of "politics." I mean, we voted, but there wasn't time to notice what was actually happening.

So I'm sorry that I let it get away. But if you wanna help, quicher bitchin, an' go get a fucking job and start carrying your weight around here. Money doesn't fucking grow on fucking trees, you know?