Hey Hippies, Hipsters, Yippies, and the rest of the scattered bretheren: Peace!

You know, my ph.d.'s in education, so I gravitate back to this subject occasionally, and that's the "flavor" so to speak, of our cookie today.

The etymological root of the word "teach" harkens back to that most powerful gesture of which people are capable: To POINT. It was first used in that context back in the ancient Indo-European language root on the prairies of Central Asia, the trans-caucasus back in the mists of memory.

From there, as a gutteral, glottal monosylable, probably, it migrated west into the Germanic languages, and south, through India, into Greece, where it morphed into "deixis."

There is a class of adjective/pronoun in English grammar called "deictic": "the," "there," "this," "that," "these," "those," "they" and "them" exhaust the class; each of them acts to point to a particular thing). But that's beside the point... 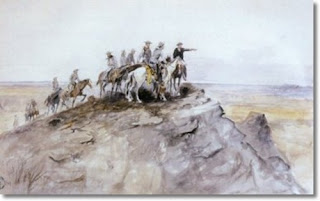 Which is that, "teaching" is nothing more or less than directing attention in some way, either by word or action toward an important, impingent phenomenon: "Look." or "LOOK OUT!"

So, in practice, anyone who "sees" and is aware of their surroundings, enough to pick out anomalies, exceptions, etc, may be--since we're all in this together, probably SHOULD be-- a "teacher." Teaching, then, is pointing to facts in such a way as to invite others to see, and to understand, too.

Everyone can teach something, but a "teacher" has a wider ambit. Their view is larger, wider, better informed.

"Learning" is what happens later when we reflect upon and discuss WHAT we have observed.

So, if you look around for something that the test-happy, factoid-based, corpoRat-sponsored curriculum of the USer schools actually points students toward, the real purpose of schooling in the COrpoRat USofA appears to be, to induct 'graduates' seamlessly (and seemlessly) to the consumer curriculum of the CorpoRat/State media for the rest of their lives.

Pedagogy's an interesting word, too. We use it to mean the art of teaching, and you can trace the metaphorical connection easily enough to yher root, which was a labelk attached to the slaves whose jobs it was to lead the Masters' children to and from the Academies.

We see in the continuous and baleful attacks on teachers, especially, among public servants, how that pernicious aura of presumptive servitude regarding teachers' status persists even into today.

PS: Stop by the Store on yer way out and check out the shirts (tees and tanks), those kewl amulets, and stock up on bumperstickers. There'll be more cool stuff in there pretty soon, too.
Posted by Woody (Tokin Librul/Rogue Scholar/ Helluvafella!) at 12:12 PM