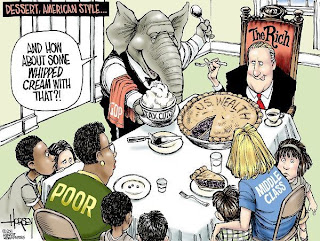 There was a clip from an edition of the (pretty savvy and useful) "Business Insider" blog from April 30, 2010, going around on the blogs today( linked below). It was revived I suppose because of its relevance as to the mind-set of the champagne partiers last Friday who mocked the Occupy Wall Street demonstrators from their balconies. All part and parcel of the turmoil and potential conflict, the stage for which is being set on Wall Street and environs, that spark being lit perhaps even as I write, or you read/hear these words.

Eighteen mos ago, already, the 'traders' were perfecting their alibis...that of course having been already 36 months into the collapse they engineered and are STILL profiting from. Though they have resorted to it since time immemorial... You know the drill.

The gist of the argument is "You loved us when the Dow was at 14,000. You lived well BECAUSE of us. If you ever want to live well again, go away leave us the fuck alone! If you don't, we'll REALLY fuck you up, cuz that's what we DO: Fuck people up for fun and profit." I won't read it to you, because I'm not sure how long I could retain my equanimity, but it ends in this paragraph:

We aren't dinosaurs. We are smarter and more vicious than that, and we are going to survive. The question is, now that Obama & his administration are making Joe Mainstreet our food supply…will he? and will they?"


These are the same, or nearly the same guys--and they're pressed from the same mold as--those ENRON energy traders who cackled obscenely and joked about grannies dying in the heat, as they instigated rolling black-outs all around California in the early Bush years, to drive the Governor from office and bolster their criminal enterprise's books, back when Ken Lay and that crowd was riding high.

Same crowd, even if the names are somewhat altered. The game's trhe same. Same agenda. They're gamblers, in the best way, as they see it.

I'd might be inclined to buy their argument, or some of it, except for one teeny little thing: the outright cheating and associated behaviors as much as "litereally" killed people with less thought than one would spend on a pest that one trod on. Another culture would call that criminal.

They're proud they gamed the system. They regard themselves as the cold-blooded realists, and regard the rest of us as little more/better than dispensable domestic animals to be disposed of as the needs of the owners dictate, regardless of the feelings of the children. It's a hard world out there, and they think--and reward--themselves as its masters.

I accord them all due respect for their accomplishments, though with a caveat: as long as when they fuck up, and get caught, they also pay a commensurate penalty: they get shot, dumped in a hole, and have a bag of quicklime poured in on top of 'em. That's how the PRC does it, with the guys (and gals) who get caught and cost "face" to the regime.

They're right: It's a deadly game. But they're not playing with their own skin. It's our lives that are the chips on the table. They're a bunch of tin-horn gamblers playing with the house's (that's "our") money.

They'd be more careful if they had anything REALLY at risk, cuz though 'deterence' is kind of a slippery slope, it does cut WAAAAY down on recidivism, doncha know, hippies?

Oh, yeah: Go buy a bumpersticker, a tank or a t-top at the store, too! We appreciate your support, more than we can say...
Posted by Woody (Tokin Librul/Rogue Scholar/ Helluvafella!) at 7:12 PM