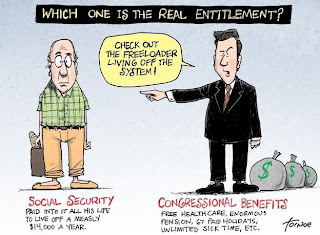 The cookie flavor of the day is rich and sweet asnd textured. Entitlement!

I am NOT a financial analyst, or even close. I'm entirely too unserious to be 'trusted' on such important matters. I keep my bank balance in my head.

But even I know that the whole conversation about 'entitlements' is a rigged game, as George Lakoff has been reminding us for some years. It echoes precisely the Righturd/ wackloon/ fucknozzle slanders about the "Culture of Entitlement" that's been the standard rhetorical tactic to attack Social Security and other Gummint social safety-net programs since Reagan and before. "Google" it. It's constituent of the ancient Conservatoid canards about 'moral hazard," whereby it is asserted that it is dangerous to the spiritual well-being of the prolateriat if things go too EASILY for them. The idea is that privation builds character, you know?

Pres. Shamwow SEEMLESSLY adopted that rhetoric--consistent with his own sentiments, clearly, but inconsistent with such surviving "Democratic" values as there still are in public discourse--and conceded the terms of the argument to the GOPhux-- literally within DAYS of his nomination. Doing so was a calculated, pragmatic, political decision, a decision powered by expediency, but it was grotesquely unfair to the facts of the case.

Under most rules, if you have been offered a commodity in the marketplace, and you PAY for it, you are "ENTITLED" to it. A car, a meal, a suit of clothes: If you pay for 'em, you are entitled to enjoy 'em. With SocSec, we have not only contributed to Social Security, but employers did too. It totaled 15% of your income before taxes.

Withdrawing only 3% per year, you would STILL receive $26,787.60 per year and it would last better than 30 years, and that’s with no interest paid on the undistributed capital. It's exactly like--in fact, for retirees, it IS-- a life insurance policy you DON'T have to die to collect, and which ISN'T gutted by the high salaries being deducted by the management thieves at the top.

That's how I understand it. If I have bungled it, please correct/forgive me.

They call Social Security and Medicare an "entitlement" as if that diminishes the justice of our claim to it, even though most of us have been paying for it all our working lives.

You want "undeserved entitlements?" Lemme remind you of the sweet deals the Congresscritters have crafted for THEMSELVES:

Cheap, highest-quality healthcare,
outrageous retirement packages,
67 paid holidays,
three weeks paid vacation (Did you know Congress can vote itself a vacation anytime it wants to?),
unlimited paid sick days, and
much much more?

Yeah, that's what I'd call "welfare," And they have the nerve to 'worry' about the 'moral hazard' of my meager entitlement?!!!!Entitlement? You fuukin betcher sweet ass, we're entitled. We paid cash for your social security insurance!!!! Just because the Gummint borrowed money out of the fund doesn't make your benefits somehow evanescent or tentative. Now when it’s time for to collect on our insurance, the government claims it is running out of money.

This answer is much the simplest one all day. One, three-letter word, in fact: WAR!

The Soc Sec fund was and is a honey-pot that Congress and Presidents could tap WITHOUT raising taxes, without leaving any fingerprints. Like the oil, it would NEVER Run out.

LBJ and a Dim Congress began it, as a way to finance their competing wars: the one in Vietnam and the "war on poverty" and other New Society programs.

About 15-20% of the so-called "national debt" consists in bonds created by the Treasure to underwrite those literally TRILLIONS of dollars in loans FROM the SocSec fund over those decades.

And now you, see--funny thing, ain't it, hippies--that the Gummint --the institution, owned bag and baggage by the Elites, oligarchs and Aristos-- actually has a motive to let the system fail.

Two motives, really: One, to cancel that enormous debt, and two, to get their feculent, blood-soaked fingers into that whole, huge, residual KAPITAL pie.

Guten appetit, hippies. See you at the beach...
Posted by Woody (Tokin Librul/Rogue Scholar/ Helluvafella!) at 5:18 AM