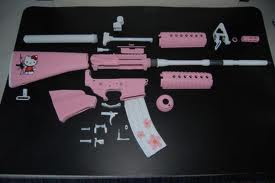 (WWH, 9/2/11) Two gun-related stories from "fact-checking" sources on Thursday morning's F-book inspired me to engage in a bit of practical propaganda. I want to start a slanderous rumor!

First, there was the story from Arizona that the GOPhux in Pima County, AZ, home of the nearly assassinated Rep, Gabby Giffords, were auctioning off a Glock handgun to raise money for the coming campaigns.

This was followed, in short order, by a report from a local scion of Politifact that the GOPhux in Oregon were auctioning off an AR-15 combat-style assault rifle to help finance their forthcoming campaigns. (In this, in Oregon, the GOPhux are not alone: the state office of some NRA spin-off is raffling off FIVE of the things.)

The Politifact piece deemed the charges "Mostly True." What the fuck? Did the GOPhux just auction off the ammo and a couple of banana-clips, I wondered? How is something like that "Mostly True?" Did money change hands? Did the weapon?

Yes, and yes, to both questions.

Turns out the Politifact folks quibbled over the term "assault rifle." Technically," an "assault" rifle must be capable of full-on, rock'n'roll, auto--blazing--matic--and not merely one-shot-at-a-time, semi-automatic--firing. (Confession: Full-on, rock'n'roll, 3-5-second-burst auto IS a gas.)

But that was just the summary of my vexation. It began with the "Glock piece" in Arizona, and the utter contempt it mirrored. It seemed to me to be callousness of the most troglodytic, male-patriarchal, repressive, regressive, passive/aggressive ASSWHOLE kind.

To reflect that contempt, and to satirize it, I commented, in essence:

"I heard the GOPhux Party of Pima County, AZ, is auctioning off Jarred Loughner's Glock in Gifford's district in AZ.

Gettin' the boy a furlough from jail to pull the lucky number, too."

It was patently not true, of course. Were the GOPhux of Pima County actually humans, they might have accused me of slander. Then a reader corrected me, taking at face value my intentional mistake of naming the weapon to be Loughner's, which it almost certainly COULDN'T be, it now reposing, empty and harmless (or so one hopes) in the evidence locker of some AZ DA. 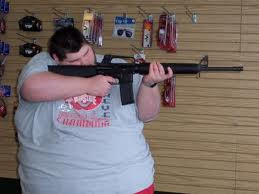 And in the reminder from that reader, I caught a glimpse of something useful: that's how propaganda works. It is utterly immaterial whether it contains a grain of, or the whole, truth. It plants the idea. And then, behind the surge of familiarity that follows the employment of the "Big Lie" strategy, the idea soon BECOMES truth by virtue of endless reiteration.

So I am repeating it.

"I heard the GOPhux Party of Pima County, AZ, is auctioning off Jarred Loughner's Glock in Gifford's district in AZ.
Gettin' the boy a furlough from jail to pull the lucky number, too."

Help me make it viral. I would fucking LOVE to watch that meme take off...