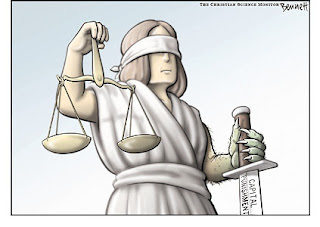 With all the controversy and conflict swirling around the execution of Troy Davis--a black man convicted under dubious circumstances, on questionable evidence, of murdering a white cop, in Savannah, GA,-- a killing which he denied to the very end having had any part in--it's possible that we'd overlook the fact that there were two State-sponsored executions committed yesterday: Troy Davis, in Georgia, and in Texas, Russell Brewer, one of the men convicted of the hate-crime, dragging death of James Byrd, Jr.

Byrd, a partially disabled black man, was attacked and beaten by three white men whose only motive was racial malice, and who then chained Byrd behind a truck by his ankles and dragged him to his death some excruciating, horrifying moments later when his head was severed from impact with a curb. Russell, a white supremacist, died without any remorse or last words, according to news accounts.

Troy Davis was convicted, mainly, of being a convenient black person who could be tied to the killing an off-duty (white) cop doing 'security' work at a fast-food restaurant. The evidence against Davis was mainly circumstantial, or in the form of witness identifications. Crime-scene identifications are notoriously unreliable. No murder weapon was ever recovered. There was no explicit, physical evidence linking him to the death for which he was convicted and was executed. And there there were allegations of witness intimidation, in any case.

There exists that kind of physically incriminating evidence on Brewer that was not produced at Davis' trial. They found Byrd's blood on Brewer's boots, found his dna on items found at the crime scene. He and his accomplices had been seen picking Mr. Byrd up. One more of the trio is also scheduled to die, a certain John King. The third got life without parole.

I am uncomfortably aware in myself of a certain ambivalence about capital punishment, which I think may be pretty widely shared, and which is perfectly illustrated by these two cases. I am sure it betrays an unwonted elitist streak in me, but I think there ARE some folks who society, through the application of laws, safely dispose of. I wish I could be an anti-capital punishment absolutist, but I can't. When you're approaching 40, and still getting your jollies murdering poor black men by dragging them around behind a truck, you've pretty well exhausted your prospects for social utility, to me...

There were cries of "justice denied," especially in the Davis case, but in a "nation of laws," you don't get "Justice."

Despite the well-meaning and sincere sentiments of the Pledge, We do NOT "DO" justice. We do "law." They are only occasionally--rarely--synonymous, and even more rarely synchronous.There is a really big difference, which should be understood by all who complain when 'justice' is not served.

Law reduces "Justice" to procedural fairness. SCROTUS Justice Scalia declared a couple of years ago that actual innocence was no bar to execution, if the forms were all followed, and conviction accomplished without reversible error. Both executions were "legal." To the executioners, that's all that matters, technically. The rest is emotion, against which "law" is supposed to be an antidote, both to revenge and, unfortunately, to compassion...

But in the face of those ambiguities and ambivalences, I think I can say this for certain:

If I were being executed for a murder I had not committed, and I were permitted 'last words,' I believe I would "NOT go gentle into that good night," as the poet warned. I believe would try to get as far through the following as I could before they flipped the switch:

"You are murdering an innocent man, you smug, self-righteous, contemptible assholes.
I hope that the memory of my unjust and bitter death poisons your every breath, taints your every pleasure, colors your every memory for all the days of your lives. May you NEVER have another day of joy, may your children starve, and may your every aspiration fail. May this malediction haunt you forever!
Fuck ALL of you for killing me!"