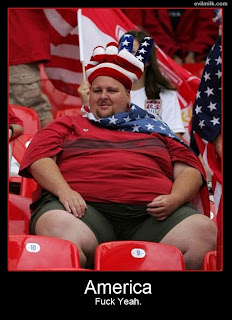 The AFL/CIO has a petition (yes, another petition) to send to Congress and the president: Tell Congress: Stop offshoring jobs. Start rebuilding America.

Woody thinks this betrays a certain naive carelessness, rhetorically: Congress isn't off-shoring jobs (though they are rewarding corpoRats which do, with subsidies and tax breaks). CorpoRats are doing it, and making money doing so.

We're fools to think the corpoRats are going to begin (re) building Murka. They have ALREADY fucked up the land, air, and water beyond repair, commandeered and claimed all the natural resources--including water--as their own; then shipped jobs and machinery off-shore to drive down wages and create worker discipline through job anxiety. When we're equivalent to a second- or third-world economy, again, then MAYBE they'd come back, a little.

But not as long as there are unions, the NLRB, regulations, or cheaper labor elsewhere...They just don't need it any more.

With globalism, free trade, out-sourcing/off-shoring, etc, the job suppliers have moved along. Greener pastures. The USer consumer is no longer vital to the bottom lines of these motherfuckers. There are huge, emerging 'consumer' classes emerging in China, Russia, Brazil, and India, as well as scores of smaller countries. USers are too expensive to keep around.

Next: On-shoring foreign labor to do jobs in the US cheaper than USers will do the work. Whole crews of laborers and craftsmen will soon be brought in by "global" corpoRats to take jobs that USer workers would be paid more to do.

A: Resentment.
Ya gotta unnerstan': fer these t-bag folks, they don't care if they take a little hit, as long as the people they hate and despise--them Negrows, Messkins, libruls, homos, and the like--take a BIGGER one, or preferably get shout out altogether.

Q: What do they resent?
A: Having to participate in the system as equals with people they will ALWAYS regard as their inferiors.

Or, rather: Attrition.
Posted by Woody (Tokin Librul/Rogue Scholar/ Helluvafella!) at 4:20 AM