WWH~~ Woody, in the Morning: Overdriven

WWH~~ Woody, in the Morning: Overdriven 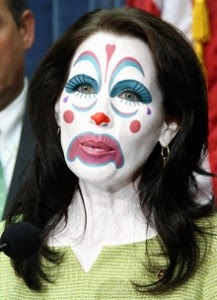 Let's get something straight: Michelle Bachmann's doing schtick. She's playing to the yokels, the "Middle Places" Home Of "Low-Sloping Foreheads," as the NYTimes guy Carr called 'em on Maher the other week. Bachmann, a shrewd fanatic, pitches it boldly, with the straight-faced connivance of the CorpoRat/SCUM "press." Woody (who reads) found out John Quincy Adams was all of 9 years old in 1776. He could barely have managed a hard-on, much less known enough what to have done with it, to have been a Founding Father...

Like ANY performer, Bachmann KNOWS perfectly well what she's doing. The genius of her performances is that the lumpen-proles to whom she's pitching do not KNOW she's butchering the facts. They firmly believe she's being persecuted for presenting an "alternative' view, for being defiantly "Christian," and for being 'conservative.' She knows she doesn't HAVE to make sense, and that her constituency LOVES her for being picked on by the "elites," and they sympathize with her because, due to their own ignorance of facts and complicities in stupidity, they've been subjected to the same sorts of "uppity" condescension. The ignorant ALWAYS fel persecuted, and Bachmann is playing it to a tee!

If I din't think the GOPhux WANT to have Obama to kick around for another couple of years, I'd be worried.

VP Biden tells labor audience in Vegas that THEY hafta "challenge" the wealthy. Woody wonders: What the fuck, Joe? WE gotta "challenge" the wealthy? With WHAT, Joe? Yer fucking candy-ass, skeevy, chicken-shit boss can't do it with majorities in BOTH fucking houses of Congress. He folds lke a cheap fucking suitcase whenEVER the wealthy crook their fingers at him, and YOU want US to "Challenge" 'em?"...Tell ya what, shitheel: You keep the cops home, promise not to send in the Cavalry for a couple of weeks. Howzat? Then "we" can take 'em on, with bullets, not fucking ballots."

~~~~~~~~~~~~~~~~~~~~~~~
(To the tune of "Shipoopi":) Hey, everybody! Everybody sing along!!!
Kabuki, KaBUki, KabuKI--You aint seen nothin' yet!!!
KA-fucking-BUKI!
JayZUZ! He "picks a fight with" (speaks with candor about) the GOPhux, giving them the outraged hissy-fit they needed to cover their pull back from the debt negotiations; which in turn gives HIM the cover to make cuts to (eviscerate) Soc.Sec/Medicare, the eventual destruction of which is no small part of what the Owners installed him to do, at the earliest opportunity.

Woody thinks we got ourselves a "Naomi Klein moment" here:
Tell Japan that increased disaster aid for the Daishi Fukashima crisis is dependent on their abandoning whaling.
Hmmmmmm? I mean, that's how the world works, innit???

~~~~~~~~~~~~~~~~~~~~~
Woody'd like to remind you:" "Profit" is the appropriation of the 'surplus value' that labor contributes to turning raw material into a "product." It is, therefore, unjust if the person 'profiting' is NOT the laborer whose labor created the "surplus" value. That'w what Marx (or Engels) would say...Didja know Marx sent Lincoln a letter congratulating him om his re-election? No, Really!