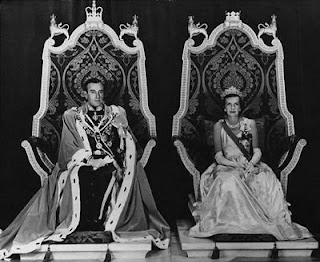 One of my long-time fascinations has been with etymology, both academic and folk varieties: I'm on my SECOND Barnhart's since undergrad days in the late '60s. "Etymology" is itself an interesting word, an ancient concept borne down from Greek, through Latin (Cicero called it "veriloquium"), into French, and thence English, which links itself to 'truth,' through the Greek "etymos," meaning "true." Thus the word itself bears at least an allegation that some truth about meaning in a word may be discerned from understanding its origins; meanwhile, "logos" is a familiar suffix, denoting the "language" or the "discourse" of or about that to which it is affixed: biology, theology, ecology, etc... "Etymology," in its own original construction, alleges itself to be "truth of words."

The origins of the words denoting aristocracy in English are an interesting case in point. "Lord" and "Lady," both arise from the social order --which would soon become feudalism-- that was required to grow the grain (wheat, mainly, but also barley and oats) from which flour was milled and the loaf--the "staff of life"-- was baked, in the Dark (the really early medieval) Ages in Anglia, in Britain, around the 8th Century, CE.

This was the time of the Beowulf saga--the so-called "Dark Ages between the fall of Rome and the onset of the Crusades, and life was hard--as the philosopher Hobbes would later describe it: nasty, brutish, and short. Britain in those times was still blanketed in the ancient European forests--the etymology of the word travel reveals the difficulties it described: to "travel" was 'travail," 'trabajo": "work." There were not many people, they lived in isolated free-holds carved out of the forest. Pretty significant labors were required to clear enough land to support the communities in and around castles. And the work--after the clearing, then the planting and the farming, then the harvesting, then the threshing--is all bloody back-breaking labor. All this occurred within an organized system of mastery and peonage, but prior to the institution of the vassalage of feudalism; though it is pretty apparently the immediat precursor for it.

And the product of all that labor, the loaf--the "hlaf," in the local vernacular-- is/was indispensible. So much so that it already, in common usage in its historical location, assumes the character of the "Part which Represents for the Whole"("synechdoche" is what the rhetoricians call it). The "loaf" assumed rhetorical and semantic value for the whole effort, from the peasants to the leaders, from the filds to the keep. Bread was so important that it's production came to represent--symbolize--the whole society devoted to it.

And the man who presided over this communal effort, the local Master, bore the title "Hlaford," the Loaf's protector.

And the person whose hands last touched the loaf before it went into the oven, she (it was always a she) was the "Hlafdiga," the "kneader" of the loaf.

Through well known lexical processes, "hlaford" shrank eventually to "lord," and "hlafdiga" became "lady." And so the primacy of bread became the emblem of aristocracy throughout the English-speaking world.

The Middle Ages were brutal. If you were lucky you got high on ergot and died by the age of 40 anyway. Dionysian riot probably meant even more to grim lives. The picture below is Breughel, The Battle between Carneval and Lent. Eat, drink and be merry for Lent is coming and with it, hardship. And you might not be around by Easter. Click on the picture, it expands so you can see the detail. 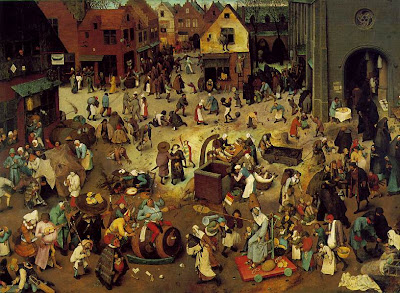