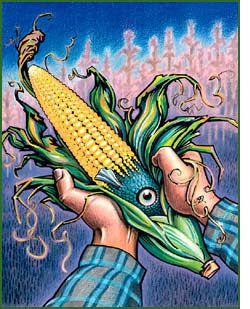 Turns out, the weed-killer, Round-Up, used on GMO crops bred to resist Round-Up used to reduce pest on crops, is probably causing birth defects down the food chain, when people eat crops with the Round-Up resistant gene.

Which put me in mind of another classic case of CorpoRat "denial," and the power of economic vs human calculi:

Asbestos use became wide-spread during the earliest days of the urban/industrial revolution, when it's flame retardant properties where of immeasurable (just how immeasurable, we'd eventually learn) value in an age when much if not most motive power for industry came from steam, and a lot of that generation took place right on-site with the machinery it powered. Asbestos saved "business" money by reducing the fire hazard to expensive buildings and equipment.

It protected people, too, of course, but that wasn't the big issue. People could always be replaced, easily and cheaply. Machinery and buildings were expensive, and hard to replace. And yes, it did seem that the people who mined asbestos, and the people who installed it, and the people who worked around it a lot, did seem to die, coughing, a little more regularly than others; and their families, too, were also often short-lived and prone to lung problems. But, in the economic calculus of the time, those were only faint drawbacks compared with the money having asbestos saved.

Eventually, the heat sources were removed further from the machineries they powered, and instead of wood, industrial buildings began to be made of less flammable materials, too, so heat could be better contained without it, and asbestos became less necessary, being replace in many applications (wallboard, insulation, etc.) with vermiculite (though, anything with vermiculite in that was manufactured pre-1990 has about a 70% chance of having asbestos in it).

In the '30s, with the attention that John L. Lewis drew to Black Lung disease among coal miners, the asbestos industry also began to take a look around, sinc eht symptoms of the coal-miners' malady greatly resembled the pathologies experienced by asbestos workers. Studies were conducted. Research was written. Asbestos producer Johns Manville had research already in 1934 which conclusively demonstrated the dangerous, usually mortal 1st AND 2nd-hand effects on life expectancy, health, etc of their product, which they hid internally and NEVER disclosed this information until it was FORCED out in 1982:

Now, you may say whatever you like, call them whatsoever disingenuous label you want to devise, but it must be clear that the deaths, injuries, illness and disabilities that occurred among asbestos workers and their families during those 50 years were NOT the "unintended consequences" of the use of a vital material.

We are now hearing a variant of the asbestos argument in the defense of GMOrganisms and genetically altered foodstuffs: the good they do--(potentially) preventing famines because the plants are so much more resistant to environmental or organic threats--is a social good that outweighs the (potential) danger of the unrestrained dissemination of the modified organisms with consequences on the natural lifeworld which are at least unknown, and at worst as disastrous as the famines they're touted to prevent.

Dr. Woody? Not buying it! When in doubt, I always recommend reference to "The Precautionary Principle." It's just a fancy expression of the eminently sound princple that it is better to be safe than sorry, writ large in the life-world:

"When an activity raises threats of harm to human health or the environment, precautionary measures should be taken even if some cause and effect relationships are not fully established scientifically."

There is a fair body of literature o the Precautionary Principle. It is enshrined in Law in some places, Germany, notably. The folks who study it say there are five primary pieces that comprise a precautionary approach:

Alternatives Assessment. An obligation exists to examine a full range of alternatives and select the alternative with the least potential impact on human health and the ecological systems, including the alternative of doing nothing.
Anticipatory Action. There is a duty to take anticipatory action to prevent harm. Government, business, and community groups as well as the general public, share this responsibility.
Right to Know. The community has a right to know complete and accurate information on potential human health and environmental impacts associated with the selection of products, services, operations or plans. The burden to supply this information lies with the proponent, not with the general public.
Full Cost Accounting. When evaluating potential alternatives, there is a duty to consider all the costs including raw materials, manufacturing, transportation, use, cleanup, eventual disposal, and health costs even if such costs are not reflected in the initial price. Short- and long-term time thresholds should be considered when making decisions.
Thoughtful Decision Process. Decisions applying the precautionary principle must be transparent, participatory, democratic, and informed by the best available independent science.

It doesn't take long to figure out why the philanthropes who guide the USer economy haven't hastened to embrace it, does it?
Posted by Woody (Tokin Librul/Rogue Scholar/ Helluvafella!) at 6:15 AM