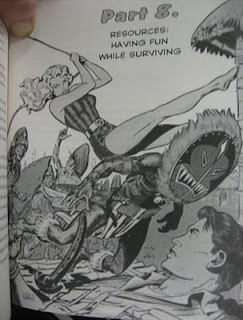 Probably, it won't come to a default. Probably.

Jack Balkin, Knight Professor of Constitutional Law at Yale Law School, doesn't think it will. He offered up a lengthy and eminently plausible set of scenarios by which Prez. Obomberama could forestall the crisis by going around Congress. I heartily recommend you read it. It's subtle, and rational, and provocative, too. I, who am not a lawyer, found every point Balkin raises to be pertinent...

... if the President were not a "Nigra," as Mitch McConnell surely calls him in unguarded speech.


What, no! you expostulate! Racism is DEAD! Obama's election proves it! America is a proudly post-racial society! Everything's different now, and getting better!

Like that li'l shit-hole Fauxville outside Little Rock, where a female, black student won the honor of being the Class valedictory speaker, but was required by school officials--both the school and the school board--to "share" the honor with a white student who had an inferior record. The link's to WaPo, but the story's been all around the Libro-sphere on the netz. (I won't soil myself with forays into the sullen muck of the Rightoids' delusions; not in my pay-grade).

The reason NOT given--but widely discussed--for demoting the young, black woman was that if she, alone, were to assume the honor, it would "cause a big mess" in the majority White, suburban school. The superintendent found a scintilla of a loophole to slip the exception through. The young woman and her mother are suing the school--awkwardly, where the mom also works--and the principal for civil rights violations. Probably, they're both finished in that town. But, yeah, we killt racism daid!

Oh, yeah, 'cept for that shooting incident in Miami last month. And there's a video of the victim of a recent cop shooting in San Francisco, of a guy who jumped a $2 bus fare, and was gunned down and left to bleed out on the street for his troubles. No, really. And this was the second extra-judicial killing by police in San Francisco in less than two weeks. On the evening of July 3, two Bay Area Rapid Transit (BART) cops shot and killed Charles Hill with three rounds to his chest. Hill's offense? Being a transient, and a trouble maker, probably drunk.

But the crimes for which all these people paid dearly was mostly being "complexionally challenged," with an excess of melanin.

And that is precisely what is at the root of Obomberama's problems with Congress. The racial factor, by itself, has been enough to disrupt the previous 200+ years of (relative) reason, fair-play, camaradery and comity between the Branches. The debt ceiling has been raised, with only token and pro-forma resistance mebbe 40 times since Raygun. What's the difference THIS time?

So, under "normal" circumstances, the debt 'ceiling' would be raised, the checks would go out, and the bills would be paid. But now, with a "black man in the WhiteHouse," however, all bets are off. I think the owners want to crash the political system, by temporarily upsetting the economic system, and blame it on the 'soshulists, libruls and nigras.'

If the GOPhux win, and St. Barry, the compromiser, folds, it means the end of even the appearance, even the resemblance, of a two-party system; it means that the Owners are ready to abandon even the pretense of a "democratic republican' form, and have opened the bidding on the State.

PS: Woody's starting a "Send Woody To DC in October" Fund. I figger I need about $1000, for plane fare, food/accomodations, weed, and kennel for the Budreaux for the time I'm gone. I can probably handle $200; so for the rest, I shall throw myself on the kindness of strangers...Or, if you think sending Woody to a "Unity" conference might be, um, counterproductive, send the $1000 anyway, and I'll go to the beach...Either way, I'm down...
Posted by Woody (Tokin Librul/Rogue Scholar/ Helluvafella!) at 11:08 AM