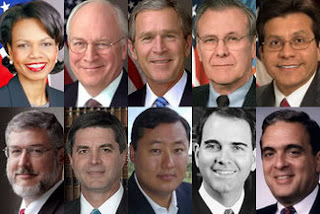 Glenn Greenwald, on CommonDreams/Salon, draws the conclusion, finally, which has been obvious since the first refrains of "Don't Look Back" began wafting outta the WHiteHouse around the end of January, 2009. The Obamanauts are not now, nor are they ever, nor WERE they ever going to prosecute the high-level Bushevik functionaries (pictured at the left) for high crimes and misdemeanors committed when they held the reigns (stet) of power.

There have always been, in my (IANAL*) opinion, four fundamental reasons/considerations that have played in this decision NOT to prosecute that "death panel" of murderous thugs and gunsels, war-criminals, thieves, liars, and miscreants of the previous regime:

1) There is ZERO precedent for a succeeding Regime to prosecute members of the Regime it supplanted. In 235 years, NO incoming administration/regime has EVER initiated criminal investigations against its predecessors, no matter the crimes of which the predecessors stood accused. Congress drove Nixon out, but that was while he was still sitting as President (and that particular act has come back on several occasions to haunt the descendants of the prosecutors). Ford PARDONED Nixon, and foreclosed forever any possibility that Tricky Dick would ever face accountability for his direst, dirty deeds. Clinton refused to prosecute any of the Raygun/Bushies for any of their misdeeds, including the
"guns-for-Hostages" arrangements and the (arguably treasonous discussions with the Mullahs, even before they had been elected).

2) There is ZERO chance for conviction if the perps are permitted to plead "national emergency"/saving USer lives, whether true or not. This is the PERFECT defense: We did it for AMERIKA! We did it to prevent terrorists from repeating the acts of 9/11/01. We did it to save the lives of Murkins in the field. We did it to keep the homeland safe. There are not 12 'average citizens' anywhere in the country who would convict malefactors if they mounted that defense.

3) There are STILL 25-30% of people--in jury pools as well as the general population--who would forgive the Busheviks of child cannibalism for NO other reason than that they were Republicans and it would piss off the Dims. Only one person would be needed for jury nullification to occur, and the odds (25-30%) say there's be at LEAST two or three who would therefore NULLIFY any vote to convict; and finally

4) (Here's where the famous O'Bomber pragmatism would come in) There is less than ZERO chance ThePrez could avoid the same scrutiny when he no longer held power. Talk about a lynching! If Obomber and Eric "Chiquita" Holder did undertake investigations of the Bushevik/GOPhux' activities conducting the war and associated interrogations, he would assuredly be inviting the GOPhux to pull out the long knives and initiate the same sorts of proceedings against him later.

It would take a leader of surpassing political courage to attempt to overcome all those obstacles, and O'Bomberama is NOT a courageous leader; he's amply shown this on every occasion when he's been challenged by the GOPhux, and caved (as he is, apparently, planning to do to "win" the debt-ceiling imbroglio).