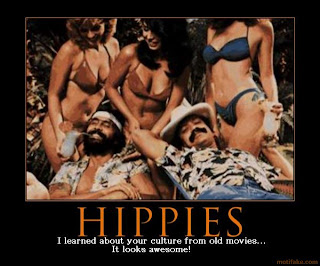 On the FB pages linked with this blog--and I gather also here, though not recently--there is an on-going discussion of what the key term of the designation of this site--"hippy"--means. In a way, it's like the term "gay." And, like gay cultures with whom we "hippies" are often compared for our malign, social (or, rather, anti-social) instincts, we're also always "recruiting." (Maybe the only difference is we didn't use overth sex to recruit, we use weed--with sex later, a likely add-on...). Terms need to be explained. Such was the case on the WWH F-book wall on Saturday. We welcomed a new member and he raised the question: "...pls brief me shortly what kind of life style hippies lead..."

Boldly seizing the opportunity chance had blown my way--and because I've been thinking about this on and off for about 40 years--I took the bit/bait:

"There are," I wrote, "still a few "hippy communes" around. (At one time there were as many as 10 here in N.M, )and a couple still hold on, up near Taos. (Taos, at one time, was basically Hippy Central, for the drop-out/simplify/back-to-nature wing.) The original Hog Farm, in Llano, has an scion-settlement in California; it's pretty much centered there now. There's New Buffalo, in Arroyo Hondo, too, I think, though it's become kind of artsy/bourgeoise over the years. The Lama Foundation in San Cristobal, is still a haven. Those are just about the last remnants of that particular emanation of hippy culture that I know of. There's a guide, with e-mails and urls, and everything...

If anything there are even fewer places available now for subsistence living, which was the original hippy ethos (along with open relationships and good drugs), than there were then. That community has shrunk. and 'incorporated.'.

After that, it's pretty much all in your head. If I knew the way...(Here endeth my reply, but I resume, below...)

The general dissaffection with encroaching, officially sponsored technology, surveillance and the onset of the invasion an occupation of Vietnam gave birth to what Theodore Roszak (1967; dec) named the "counter-culter." The "hippies" constituted one thread of this counter-culture.
"Hippies," aws I use the term, and according to their behavior and espoused beliefs, were 'drop-outs.' They went back to the land, where they could find any. In spite of local resistance in many places where they sought to settle, some of it quite violent, a lot of them stayed there, and no small number of them used the opportunity to get wealth enough to be comfortable, what with a little of this and a little of that and some of the other thing.

But still, most of the folks who made Woodstock didn't leave "the Farm" and go home to communes. They were mainly urban folks, who went home and went back to school or jobs or something. They were NOT, mostly, drop-outs pursuing the next agrarian revolution. Probably, they were either already actual or were incipient members of the OTHER group, which is (imho) confused with "hippies," because of the overlapping chronologies, and semiotics of the day.

There was another branch of the Counter-Culture (Roszak, op.cit): I call them the Counter-Hegemonists. It's an awkward term. I'm still trying to polish it. These were the folks--I was among them--who were often engaged in the popular resistance/street-fighting which cast its shadow over the period. I cannot recall a single instance in which I was a participant when trouble, when it started, did not begin with a tear-gas grenade from the cops. And somebody threw it back. Somebody ALWAYS threw it back.

Cop-riots were COMMON. I got caught up in a couple, and it wasn't pretty: a police horse once stomped my foor, which was clad only in a pair of huaraches, and crushed the toe-nail on my big toe, and the root, and it never grew back right; I was lucky it was only my toe; they're BIG hjorses--but I digress...

The development of this existentially "engaged" wing of the "movement" (if it can be called that; I'm not sure) pretty well followed the trajectory of the war, climaxing in one sense at the Democratic national Convention in Chicago, in '68, which was the year the US suffered the largest number of casualties--both kia, and wia-- of the entire conflict: more then 16,000 dead. It climaxed again in may, 1970, with the killings at Kent State, when the State forcefully announced it was going to respond to these challenges to its power with more deadly force. Four Dead In Ohio--three more a couple of weeks later in Jackson, MI; and violent demonstrations all across the country. But the killings put the lid on things, let some of the air out of the tires.

After the '70s, 'hippies' mostly disappeared--though as I said, there are some still scattered about in communes (and occasionally in office buildings) around the world. A lot of the current discourses of dissent echo the yearnings of the '60s.

The counter-hegemonists turned their desperation inward, and their frustrations outward. They entered the academy(e.g., Bill Ayers, et al) and or became teachers (too many to count), or forest rangers, of even bureaucrats in humanitarian agencies. And now they're starting to retire.

Their influence is still potent (see, e.g., South Park), and the tendrils of the resistance they/we wove into a national resistance movement are sometimes still on the cultural breezes, unmistakable, like the smell of weed: once you smell it, you know it. And resistance is still in their heads.

But I dunno if there can be another "hippy" movement like that. It was a long time ago, and conditions were VERY different--there was a certain amount of general prosperity, for one thing.

Of course, nothing ever "goes back." And I don't want it to be thought that I'm endeavoring to 'foreclose' the discussion. These thoughts are offered only as the (I hope, informed) observations of someone who was there, in it, and bears a scar or two. FY EIEIO: For Your Entertainment, Information, Edification, Instruction, and Opinion.
Posted by Woody (Tokin Librul/Rogue Scholar/ Helluvafella!) at 5:25 AM