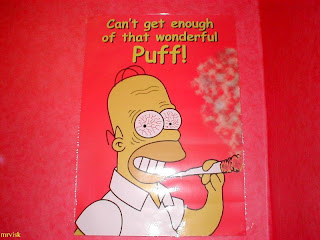 Dr. Woody sometimes wonders, what have some people been smoking and where can I get some (though I probably couldn't afford it), meng???

There is, apparently, not insubstantial, and to my mind understandable, disaffection with The First Black President's seeming inability to resist the outrageous, ideologically motivated, and maliciously inspired attacks by the Owners, through their GOPhux gunsels and fops, on the few pittances remaining to working people's social safety netting, and women's reproductive rights, to say nothing of the even deeper impoverishment of the poor, elderly and disabled. The discouraging words are growing in length and in loudness.

This disquiet, in return, has prompted a new flurry of reminders of "what he's done for us," emanating from the Kool-Aid contingent. When cheerleading doesn't appear effective, there comes the drone of "if you're critical of O'Bomberama, you must be 1) a GOP agent, 2) a tea-bagger, or 3) mentally impaired. These criticisms are mostly offered in the same tones as the most committed Zionists reprobate (v, trans) any criticism of the Israeli State.

There is, naturally, a cry to find a 'Progressive challenger' to poke some liberal steel into the Great Compromiser's backbone. Someone on the ZuckerBook today, in apparent desperation to name a challenger who could/might 1) provoke O'Bomberama enough to push him to the "left," or 2) even displace him altogether, proposed Cindy Sheehan and Ralph Nader on a 'progressive' ticket? Of course that is a fool's errand.

Such a ticket is "unelectable." Beyond the problems with their cracking the CorpoRat/SCUMsters arbitrary, editorial "viability" criteria, both are personally detested by myriads --on both "left" and "right"-- of possible voters, even BEFORE their "political" views are aired, dissected, and distorted by the CorpoRat/SCUM "press."

Nader is, obviously, a particularly problematic candidate. I was having breakfast the other day with a very nice guy who commented wryly about "Unsafe At Any Speed" -- which, though spedifically aimed at the Corvair, was even more an indictment of the industry as a whole, and its cavalier disregard for passenger safety in 4000 lb, self-propelled, barely-guided missiles on skinny tires and drum brakes; though it was NOT reported that way, and still is not--Remember the exploding Pinto? Such is that ancient, indispellable antipathy, and that's only the beginning.

Cindy's a dear, passionate, dedicated, soldier, but I don't see her having "Field Grade" qualities. Even so, Dims who might support Sheehan would be turned off by Nader, whom they also STILL (wrongly, I believe) blame for Bush, the lesser, and his eight-year reign of terrorism.

The reality of it is that there are NO likely candidates to replace ThePrez from the Left, because the range of discourse that would be necessary for the "real" left to reach the popular ear is ridiculously--and predictably--circumscribed by the interrlocking directorates and board-rooms of the corpoRats who OWN the press/media.

And, I guess, the idea is emblematic of to what extremes one is driven in order to protect the fragile illusion of a still-functioning popular sovereignty.

Like Woody Says: One may be honestly mistaken. But when the mistake is clarified, one must choose: be mistaken, or be honest.
Posted by Woody (Tokin Librul/Rogue Scholar/ Helluvafella!) at 10:16 AM