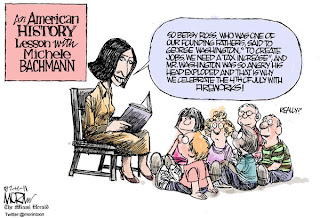 Don't you get just a leetle impatient with these well-meaning, sincere folks like John Nichols, who take umbrage at the apparent willingness of Bachmann and her ilk to play fast an loose with "facts" and "history. (E.g.: JQ Adams was NINE in 1776; barely old enough to squirt, much less "father" the Country, but Bachmann doubled-down on her claim of his special contribution to the national paternity to back up her specious claims; but never mind)...

This is the new face of the "politics of faith," which will probably be more prominent and more important this cycle than ever before, especially with both Bachmann and Palin actively stirring the evangelicals' pots, and the way "God" is embedded in the conscieousness of the lower-information voters. Just as with their faith/belief in the Bible, along with their selectively literal readings of it, historical facts, too, are as irrelevant to Bachmann and her assemblage of acolytes and asslickers as the the fact that the Scriptures are utter, contrived, post-facto fantasies are irrelevant to the Pope and the Catholics.

It doesn't MATTER what is "true." What matters is that one BELIEVES what one is TOLD! It is this SAME "Faith," the same impulse, which validates climate change denial, too. And since they're talking in an almost autonomous discourse (think, e.g., nuclear medicine or post-structural semiotics), of faith and dogma and orthodoxy, what they say matters less than that they say it. Testament!

What matters is that you (the follower) believe IN the inerrancy of YOUR faith, and are a member of 'the Body" of believers, and that you pledge your unshakable faith by ignoring, or excusing or reinterpreting what OTHERS call 'errors,' while heeding the voice of the anointed one. Probably, pretty close to 30% of the populace would fall into this class of "believer," in the USA today, even if not ALL of them would pledge their faith in any single "messianic" candidate (yet).

As with the racist/craackkker crowd--the recently announced David Duke, and his ilk--it is only to be hoped that the fragmentation among the 'extreme" candidates like Bachmann, Palin, Paul, DeMint, et al, will prohibit any of the real fringies, the crazies/fucktards/wackloons from seizing the nomination.

Still, for all her antic views, and even despite what skeletons might pop out of her hubby's 'closet,' it would not be THAT long a shot if Bachmann ended up on the GOPuke ticket.