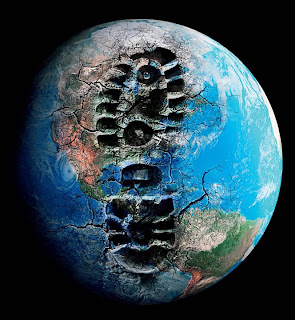 This mini-screed has been circulating around my part of Zuckerberg's maze:

It ends with the blanket condemnation of USer foreign aid: "...Yet we donate billions to other countries before helping our own first." And then dares you to "Have the guts to re-post this." (Which latter crap just pisses me off; talk to me about "guts" when you've faced down a fully-armed, loaded-and-locked National Guardsman with an bared bayonet, as I was forced to do in the Spring of 1970, in the echo of the fusillade at Kent State... But I digress) What gets me is the whole tone, kind of nativist, almost know-nothing timbre of the piece.

Item: The amount of (non-military) foreign aid the US sends abroad is miniscule. It's less than a smidgen. Don't look there for scapegoats. It sounds like a lot, until you compare it to the "war budget." You could fund the bulk of call it "non-strategic" or 'humanitarian' aid to the whole world on what the Gummint shelled out to Jerry Falwell's "Liberty U": Nearly a cool half-a-billion fucking dollars in federal money last year ALONE.

Item: Look at the FIVE fucking military campaigns "we" are waging in the Eastern Med/Central Asia, the first two of which were waged OFF-BUDGET by the cretinous craven motherfucking Busheviks. AND which the current incumbent has increased to FIVE. Even if they're on the books, it still takes butter to buy them fucking bombs.

Item: Look at the BILLIONS of dollars in tax breaks for the wealthy that the "people's President" never seems to have the votes or the authority to rescind, unless at the cost of cuts to the very sinews of the social safety net, reductions of services and benefits to the most vulnerable, devaluation (and possibly the out-right sale) of Social Security to Wall Street.

Item: Look at the subsidies lavished upon already-wealthy indstries, such as BOTH McDonald's AND Exxon-Mobil. His hands were all over the trillions that were shoved out the Treasury into the banksters' cavernous maw to "bail-out" the Gramm-Leach-Blilely & Clinton fiasco. Oil subsidies, coal ("clean"?) subsidies, nuclear subsidies, CorpoRat agro subsidies.

Item: And what about Israel?

C'mon. Don't be stupid, jingoistic ignoramuses! Castigating "foreign aid" is blaming the victim, in the EXTREME, since most of the places to which we supply "humanitarian/non-strategic" aid (such as it is) wouldn't be in such straights without the golbal dominance of the USer/western/capitalistic, hegemonic global order

Get just a LITTLE perspective.

~~~~~~~~~~~~~~~~~~~~~~~~~~~~
The psychologists have a term for it: ">"Learned Helplessness." Conveniently, the label lets the psychologists themselves off the hook for the experiments they had to conduct to achieve their torturous synthesis. It has been a big help in conducting "unconventional interrogations." The guy who invented the technique, by psychologically destroying dogs, is the same fellow who is the advisor-in-chief from the American Psychological Association to the USer military and counter-insurgency interrogation teams. Martin Seligman--they call him "Mahty" for short, cuz he is short, of stature--is the genius' name. It is a remarkably useful interrogation environment, I imagine.

In the same way that Seligman trained dogs (and presumably, people too) to be 'helpless,' the ideological apparati of the Owners and Overseers have labored without cease from the very beginning of the last century to habituate the Masses to ignorance. They've only gotten better at it over the years. The "average American" has been exhaustively, lengthily, carefully, and thoroughly TRAINED--via the most massive stimulus-response experiment in history--to be stark, staring, tongue-tied ignoramuses.

It started the first instant their parent plopped them down in front of the flickering, blue screen, and it has never--not for one single moment--subsided since.

"Why ask "why?"" Don't think; do! What's the constant message of ALL the media? Thinking can fuck you up. Here, let's play FARMVILLE!