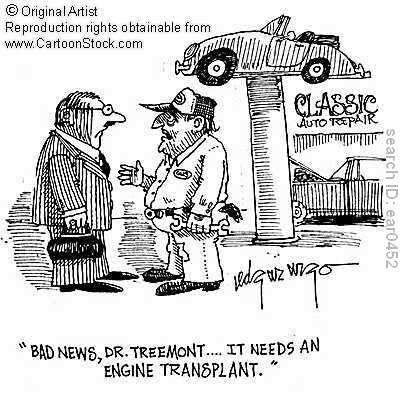 Are MDs More Ethical Than Mechanics?

Probably not. But I got a posting from a frantic MD today whose knickers were painfully twisted over the prospect of the US Gummint, through one or another of its agencies, sending investigators to MD's offices to assess the alignment of their services with the regulations governing them. Oh, GAS-fucking-P! Talk about special pleading! It's a particularly glaring example, though not unexpected, considering the source. This woman (Dr. Tamzin Rosenwasser, MD, by name)'s knickers are perpetually knotted, and she spreads alarums regularly. But this was especially egregious.

Actually, I believe a very strong case could be made that, due to the huge amounts of money that are implicated in the bills for even the most ROUTINE surgical procedure, MDs--blood/bone mechanics, mainly--should be MORE closely scrutinized than mere metal mechanics. I had stents installed in the old fuel pump a couple of years ago, and the bill was $20k, and then some (luckily, I had insurance, and didn't have to allow myself to expire from sheer neglect).

The place where they did me in 2006 is busy as a Jiffy Lube on the first of the month. They do 15 to 30 per arterial procedures per day. They have two bays ("cath labs"), two full-time teams and an attached hospital, with (available) refreshments.

Carcasses, pale and wan, of all shapes, in all conditions, were parked in the hallways like old clunkers on some dusty lot, waiting for spares. The comparison is more than apt.

(Homework experiment: Type in "Doctors Mechanics" in the "Images" box of your favorite search engine. N.B: all the search engine images associating MDs with auto mechanics are free-lance and unpublished. Like the ones here. That's seems revealing to me, since it suggests there may be an effort (unconscious, or sotto voce though it may be) to prevent images which make that association from entering the public discourse and finding traction there. In the deadly "double dative" of the most skeptical Roman of them all, Cicero: Cui Bono?)
~~~~~~~~~~~~~~~
Like Woody says: Grown-ups don't expect lavish "credit" for doing the right thing, or for NOT doing the wrong one.
Posted by Woody (Tokin Librul/Rogue Scholar/ Helluvafella!) at 10:12 AM